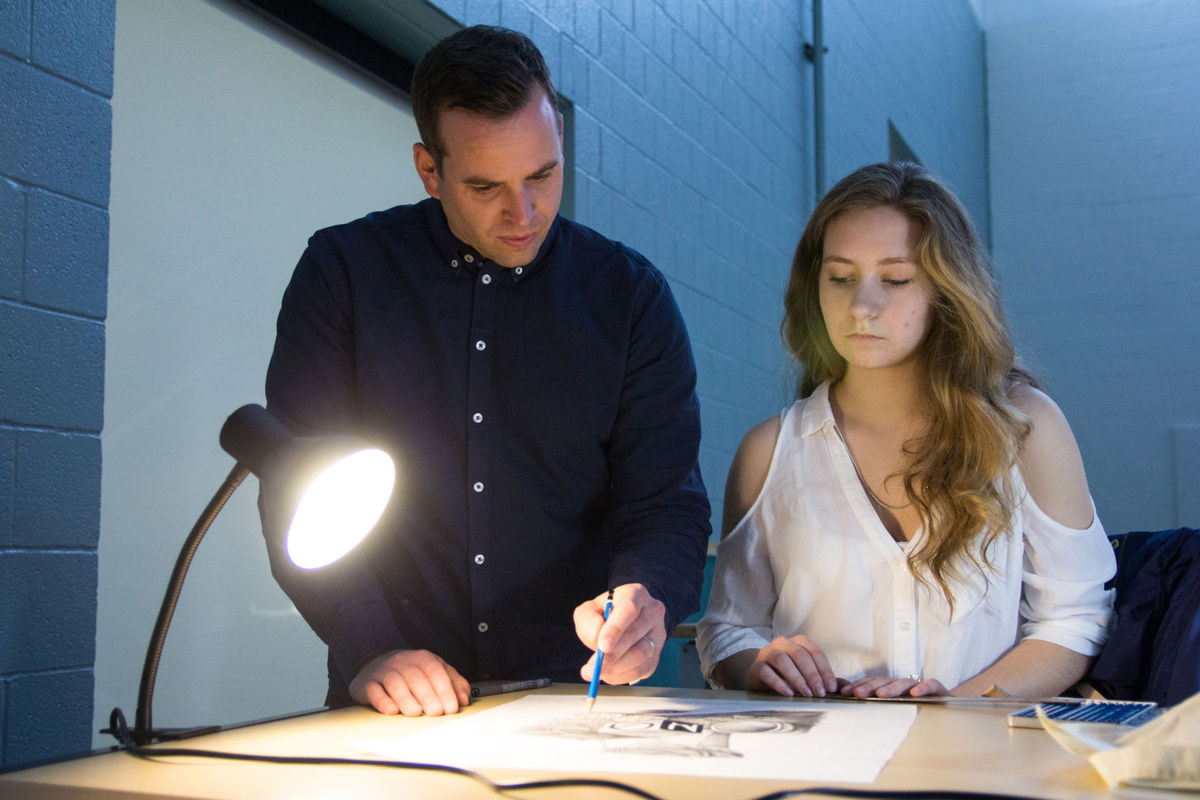 Christopher Darling is an illustrator who is using his talents to try to make the world a better place—he also happens to be an assistant professor in the School of Visual Communication Design (VCD).

"I want to do things that have an impact—are ethical. I don't necessarily want to take a job for whiskey or something,” Darling said. “ I want to do stuff that is going to help and benefit society or communities.”

Prior to coming to Kent State, Darling lived and worked in New York City. He’s done artwork for the New York Museum of Natural History, The United Nations Refugee Agency, and his work has appeared in several magazines.  Recently, his work was in the Limner Gallery in New York for an Emerging Artists exhibit.

When his career first started, Darling did any project he could find to pay the bills. Some of his early endeavors include creating packaging for Glade products.

“When you’re paying $2,500 a month for rent in New York, in a one bedroom 17 floor walk up, you’re just trying to make money,” Darling said.

Now that he has reached a level a sustainability, Darling is able to do more projects that he is passionate about. One of which, is the history of Native American tribes in the Midwest—a passion he developed growing up when his mother gave him books about Native Americans and took the family to different nature centers.

He took the paintbrush and went to work creating eight paintings for a solo show in Madrid this May. The show is at the Panta Rhei gallery, an illustrator-only gallery, and the paintings look at sporting, historical characters in rust belt cities and personifies them. Each character happens to be the state animal.

“So, (the paintings) kind of looks at the history of the persecution and annihilation of Native American tribes in rust belt cities,” Darling said.

Darling hopes to get his work seen overseas because he feels that Europeans would be more receptive to his work.

“I feel like it becomes sort of like outsider work here almost because it’s like, we shouldn’t talk about those kinds of things, you know, that matter,” he said. “I want to push some buttons, and I want our country to admit the wrong we’ve done, have a consciousness and apologize to Native Americans, African Americans, to immigrants, to Middle Easterners.”

Darling uses art and illustration as a way to make a statement and express his ideas. He’s done work with the Oriana House, a nonprofit agency that helps those with chemical dependencies and those reentering the community.

Along with a graduate student, Darling worked with nine men, who were transitioning from being incarcerated to day programs, to collaborate and paint a mural

“The content of the mural revolves around East Cleveland and bringing back community, like pride, work ethic, obviously education because that’s something that’s lacking right now (and) peace,” Darling said. “Those were some of the general themes the guys came up with.”

Darling is working on a paper that looks at the correlation between poorer neighborhoods in Cleveland and art project implementation to see if that improves statistics of violent crime and rape.

Darling is dedicated to making a difference not only in the community and society, but also in his classroom.

“I can’t stress enough, how good of a professor he is,” said Nick Blanchard, a junior VCD major. “I think his dedication and devotion to his students is the best thing.”

Blanchard, who had Darling for Graphic Narrative, said that Darling goes above and beyond his duties to have a presence in the school.

“He’s really active in the VCD community…he’s always present at every extra-curricular thing that involves design,” Blanchard said. “He’s always interacting with students in a way that he doesn’t have to, but it’s obvious he wants to and has a desire to see them grow.”

Junior VCD major Lindsey Meisterheim had Darling as a professor for Illustration I and Graphic Narrative, and said that Darling is inspiring because he’s worked with many big names and helps students find their full potential.

“He’s a giant kid,” Meisterheim said. “But that’s what makes his designs so unique because he draws like, very raw.”

Meisterheim went on to say that Darling was more of a relaxed professor compared to previous professors.

“I learned to not take things too seriously,” Meisterheim said. “We were complete opposites when I came in and I thought everything needed to be perfect. He told me that human error is how you give it personality.”