The Army invested its newest Civilian Aide to the Secretary of the Army (CASA) April 16 during a ceremony in the Pentagon.

“My 20 years of faithful service in the United States Army have included some of the most rewarding experiences of my life, and now I have the opportunity to continue that service to Ohio’s soldiers and families,” says Mansfield. “As a retired Army officer, Iraq veteran and a father of a current soldier, my heart has never been far away from the military. I look forward to working with community and state leaders to meet the needs of our soldiers, veterans and families in a meaningful and tangible way.” 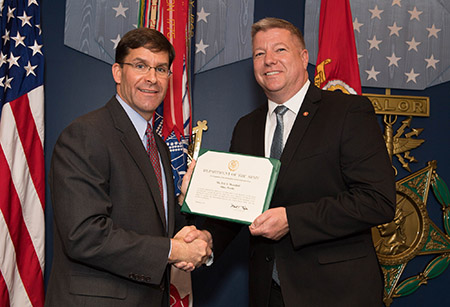 CASAs are a vital part of the Army. Their duties and responsibilities include keeping the public informed about why a strong and robust Army is vital to our national security; partnering with the Soldier for Life Program to support our transitioning soldiers and families; connecting prospective soldiers with recruiters and commissioning sources; promoting good relations between the Army, Congress, and the public; and advising the secretary on regional issues.

“We appreciate your willingness to take on this important position,” says Esper.  “The support you will provide the Army and our soldiers and their families is a great service to Ohio and our nation.”

Each state, the District of Columbia and the five U.S. territories have one or more CASAs appointed to provide a vital link between the Army and the communities for which they serve. CASAs are usually business or civic leaders who possess a keen interest in the welfare of the Army and their communities.

Mansfield served more than 20 years as a professional soldier, enlisting in the Ohio Army National Guard in 1986. He served six years as an enlisted soldier before earning his commission through the Ohio Military Academy where he was selected both as class president and the school’s honor graduate.

As a captain, Mansfield was commander of the 1484th Transportation Company in Akron, Ohio, on 9/11. Later, he deployed as a logistics officer to Operation Iraqi Freedom during 2003-04. After retiring in 2006 at the rank of major in the Army National Guard, he helped lead “Mitts for Military,” an initiative resulting in much needed recreation equipment sent to more than 2,000 deployed troops from all five military branches.

As a career journalist, he often covered military issues as an Emmy award-winning anchor reporter with WKYC (NBC) in Cleveland, Ohio.  He produced and wrote two military documentaries with Western Reserve Public Media, including a one-hour film documenting the creation and dedication of Ohio’s Vietnam Veterans Memorial.