“I feel honored to be the Grand Marshal,” Cribbs says. “I feel like it’s a job well done on my part to be able to have this accomplishment, to be asked to be in a position to represent Kent State in this fashion. I love giving back to, not just the community, but my alma mater. This is a great way to do it and continue this tradition.” 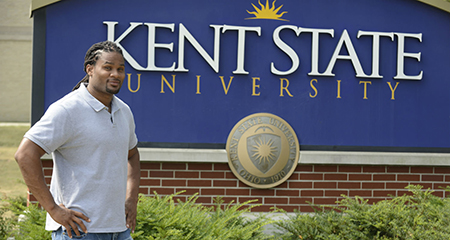 Kent Campus Buildings Undergo Accessibility Improvements
Many academic buildings on the Kent Campus will undergo improvements to make them more accessible to people with disabilities. The buildings, many of...
Energy Conservation Reminder
We all know the importance of conserving energy in the workplace, but there are certain days when energy conservation efforts can have a significant...
Mail Services Offers New Shipping Options
Mail Services has added two new options for mailing packages that are available through FlashPac, the department’s online shipment service. First, a...
e-Inside
Street Address
University Communications & Marketing