Why are plants often sterile when their parents are from different species? How do species remain separate entities in nature?

Andrea L. Case, Ph.D., associate professor in the Department of Biological Sciences in Kent State University’s College of Arts and Sciences, co-authored an article that may provide some answers to these basic questions in the Proceedings of the Royal Society B, which was recently published online.

In their article, "Selfish Evolution of Cytonuclear Hybrid Incompatibility in Mimulus,” Case and her co-authors from the University of Montana (Findley R. Finseth, Camille M. Barr and Lila Fishman) describe their use of genomic data to document natural selection on genes responsible for hybrid male sterility in Mimulus, commonly known as monkeyflowers.

One of the ways that biologists can identify distinct species of animals and plants is to show that they cannot make viable or fertile offspring after they mate. 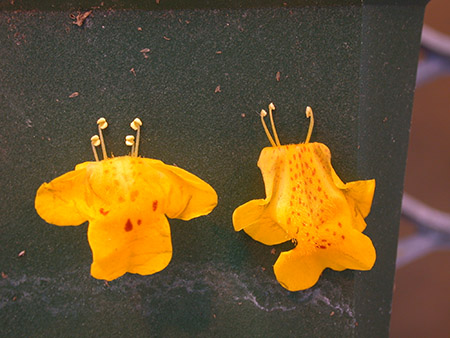 “Many closely related species, those that were recently members of a single species, have lost the ability to make viable or fertile offspring with each other,” Case says. “The process of how that happens is still under investigation, and it’s particularly important to figure out the genetic mechanisms for the evolution of reproductive incompatibilities between species.”

The article also addresses the consequences of genetic conflict, which arises when one genetic element reduces the fitness of others in the same genome. Male sterility genes in plants have been predicted to cause genetic conflict between maternally inherited mitochondrial genes that are not transmitted by males, and nuclear genes that are inherited from both males and females.

“Our results are consistent with the ‘selfish’ spread of a maternal mitochondrial male-sterility gene in a single population, followed by strong selection for nuclear suppressors that restore male fertility,” Case says. “This is an example of intragenomic conflict driving the evolution of selfish genes and suppressors within species, and it may often underlie sterility in hybrids between flowering plant species.”

The specific genes that are in conflict in their study are those that plant breeders use to create new varieties of crops. Case says there is little data out there from noncrop plants, such as Mimulus that show how evolutionary forces, such as natural selection have acted on these genes in the past.

“The genes we have identified as being involved in male sterility are ones that are ubiquitous in flowering plants, so the genetic mechanism we are studying might also be ubiquitous,” Case says. “It may be a very common mechanism that helps maintain species as separate entities in nature.”

Case spent the spring of 2015 conducting this research and analysis, on sabbatical, at the University of Montana followed by further analysis in 2016. While the data in this paper shows what has happened in a single population, future research will address if this population is unique or typical. They also want to know if any other elements in the genome are involved in the resolution of genetic conflict, and the potential consequences of conflict for other parts of the genome.

Photo caption: Pictured is a deformed male sex organ from the flower of a male-sterile hybrid between Mimulus guttatus and M. nasutus, stained blue and viewed through a microscope. (Photo credit: Camille Barr)