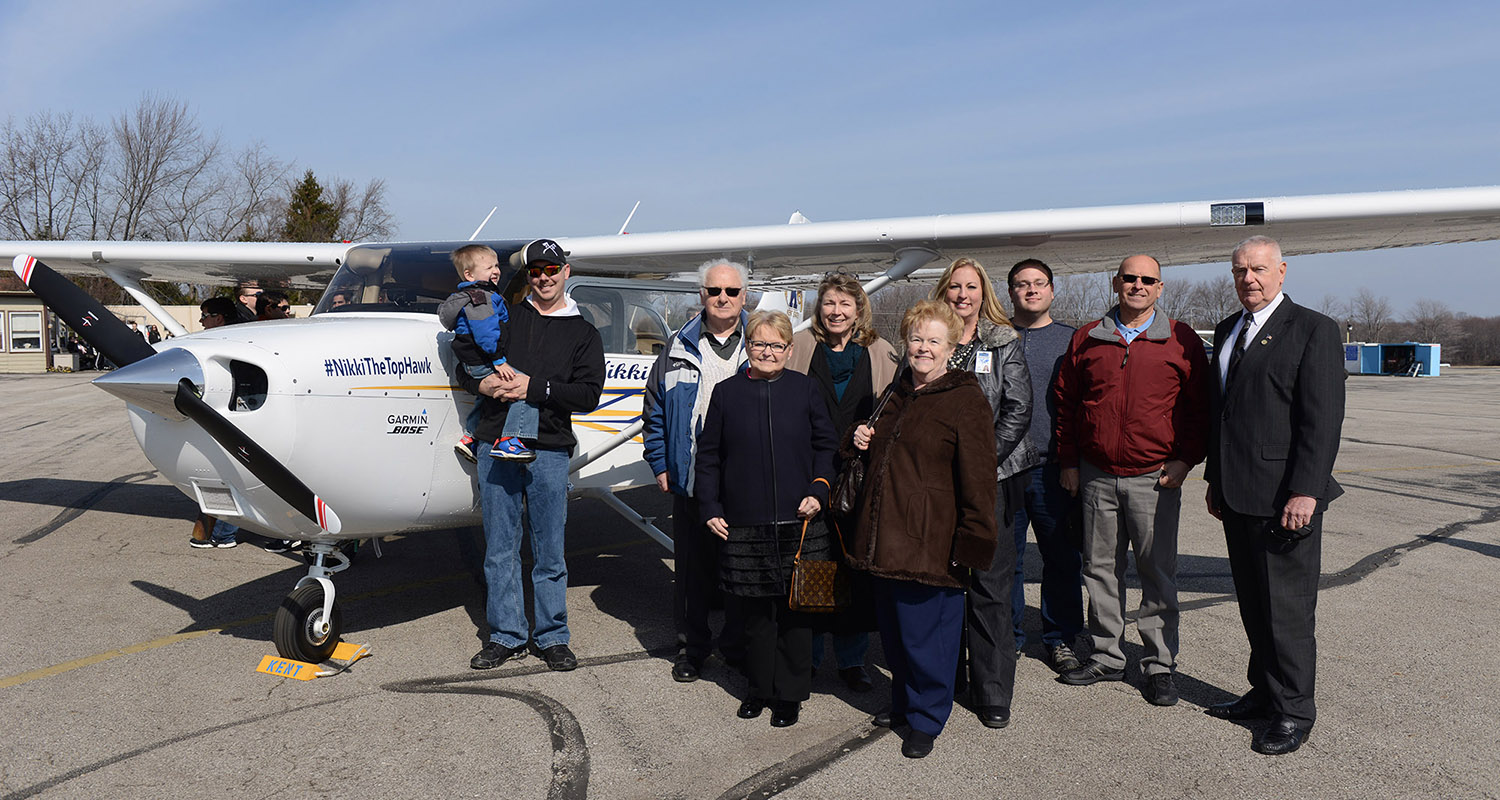 Kent State University’s Aeronautics Program in the College of Applied Engineering, Sustainability and Technology is one of four universities nationwide to be selected as a partner school for Cessna’s 2016 Top Hawk program. The program encourages the pursuit of careers in aviation and provides students access to industry-leading aircraft. The program also offers an internship opportunity for a Kent State student in the summer of 2016.

“This is a great opportunity for the Kent State Aeronautics Program to continue to partner with Cessna,” says Robert Sines, interim dean of Kent State’s College of Applied Engineering, Sustainability and Technology. “We appreciate the opportunity to collaboratively promote both our outstanding brands.”

The college received a Kent State-branded Cessna® Skyhawk® 172 aircraft, a preferred flight trainer to be used for recruiting, training and promotional activities, for one year. The Skyhawk is renowned for offering the best combination of proven reliability and modern features, including the G1000 avionics system.

The Aeronautics Program named the aircraft Nikki in celebration of the life of Nicole “Nikki” Kukwa, a Kent State aeronautics student from North Royalton, Ohio, who was instrumental in establishing the Women in Aeronautics Club, was an exemplary student and served as an inspiration to those who knew her. Kukwa died on Oct. 23, 2006, after receiving a leukemia diagnosis during her junior year at Kent State. A three-day, girl’s aeronautics camp takes place annually in Kukwa’s honor showing her continued, positive influence in aeronautics.

In addition to supporting typical flight training operations, the Top Hawk aircraft will be flown by three of Kent States’ female pilots as they participate in the 2016 Air Race Classic, be used in the conduct of outreach events in at least 15 states represented by Kent State’s flight instructors and students, provide exploration flights for each of the Aeronautics Program’s summer aviation education camps and be featured at the 2016 EAA AirVenture in Oshkosh, Wisconsin.

Maureen McFarland, senior academic program director of Kent State’s Aeronautics Program, expressed her appreciation to Cessna and shared that the college will be creating a social media presence for the plane.

“We’re thankful for the opportunity Cessna has given us to market two amazing products: their aircraft and our students,” McFarland says. “We have more than 15 outreach events planned throughout the spring and summer, so stayed tuned for our Top Hawk’s tweets and Facebook posts. It will have a great story to share.”

The Aeronautics Program at Kent State offers students a bachelor’s of science degree focused in one of six distinct areas, including an aerospace engineering program and its foundational flight training program. Students also can expand their academic credentials through one of the program’s five minors, including a Part 65 aircraft dispatcher program.