Live Chat
The walkways at Kent State University at Ashtabula were lined with thousands of American flags in honor of those who lost their lives in the Sept. 11 attacks.

This past week, the walkways at Kent State University at Ashtabula were lined with thousands of American flags in honor of those who lost their lives in the Sept. 11 attacks. 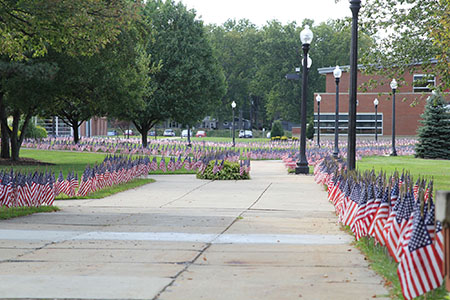 The flags, provided by the Student Veterans Association, have been an annual 9/11 tradition at Kent State Ashtabula since 2010.

“In 2010, the student veterans decided to make a small memorial for the victims by placing 144 flags around the on-campus flag pole,” says Kerri Lochmueller, faculty advisor for the Student Veterans Association. “The student veterans then decided they would eventually like to place one flag for each person who lost his or her life.”

In 2015, the Student Veterans Association reached its goal and has since placed 2,977 flags — one for every victim of the attacks — all around campus.

Brittany Dell, secretary of the Student Veterans Association, says that she hopes people passing by will take the time to reflect on what each flag symbolizes.

“Each flag represents a single person who cannot be here with loved ones today —  every flag is a life lost,” Dell says. “I hope that students who pass by reflect on that day, their loved ones, those who lost their lives and those who are currently serving to continue to keep our rights.”

Lochmueller says that while each flag has a solemn meaning, the display should also remind people of the acts of heroism that came about as a result of that day.

“The flag display is not only about commemorating the victims, but it’s also about encouraging people to remember the heroes,” Lochmueller says. “There were a lot of men and women, both first responders and civilians, who risked their lives to save many, many more. Without them, the student veterans would be putting up way more than 2,977 flags.”