Live Chat
This poster is one student’s approach to a Communications Studies service learning project in which students created and implemented a minicommunication plan to persuade others to send love notes to organizations that have been targets of hate mail.

In the midst of recent events in America, some Islamic centers have been attacked or received hate mail. Constance Kassor, assistant professor of religious studies at Lawrence University, decided kind words could combat the hate. After receiving permission from the targeted 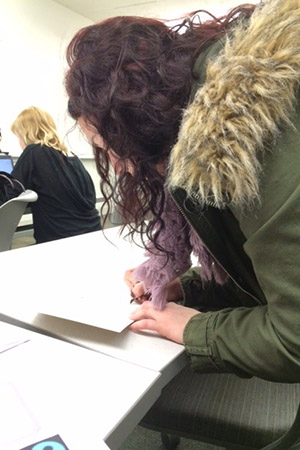 Islamic centers, she compiled their contact information onto the Love Notes for America website and asked people to send them words of support.

“I wanted the class to test and apply the premise that the antidote to hate speech is love speech,” Smith says.

The service-learning project called for students to create and implement a minicommunication plan to identify and persuade at least 10 people to send a love note to at least one of the organizations listed on the Love Notes for America site.

Ellen Morales, senior communication studies major, says she had never taken on such a project, but she took to the task quickly. After receiving the assignment, Morales says her first thought was, “The limit is 10 postcards. Can we do more?”

“I’ve made and mailed Love Notes fliers, and I’ve also made bookmarks, which I’ve been putting inside romance novels in the library,” Brian says.

Jasmine Adams, senior communication studies major, works for a nonprofit and believes passionately in spreading the love to those coming from different backgrounds. She has shared this project with co-workers and friends.

“Looking at people from other countries or different backgrounds than my own, I do feel my part in this service project is a voice in making change,” Adams says. “That’s what I am passionate about when it comes to culture and diversity. It gave me a push to want to become more active and participate.”

With this motivation, Adams says her project will begin with a poster of a broken heart, which she will then fill with pictures of people writing Love Notes.

“The torn heart will be mended with words and pictures of people with a Love Note,” Adams says. “This will be a way of mending the bond through words of love and compassion, representing a connection to people you don’t know in efforts to make change.”

The students say they have experienced mixed reactions when approaching individuals and groups about writing a love note.

“I tried to reach out to people I know wouldn’t necessarily do this on their own,” Morales says. “Most people have been really excited about it. Some don’t want their picture taken or don’t know what they should write.”

Smith hopes that as her students complete this assignment, they will recognize how important love is and discover the barriers they may face when spreading it.

“A cure to hate speech can’t be a restriction on speech,” Smith says. “The notion of love speech is so important.”