Student volunteers from the Campus Kitchen at Kent State University have kicked off a weeklong “Raise the Dough” online fundraising challenge to benefit hunger relief efforts in Kent. The challenge is hosted 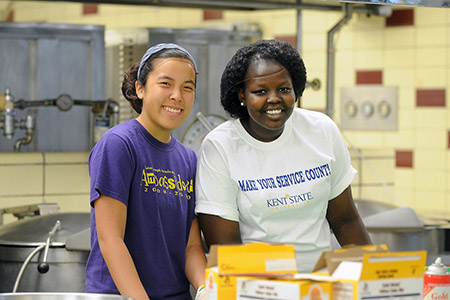 by The Campus Kitchens Project, the nation’s leading nonprofit empowering students to fight hunger and food waste in their communities. It is supported by the Craig Newmark Philanthropic Fund, a private fund created by craigslist founder Craig Newmark in 2016 to support and connect nonprofit communities and drive powerful civic engagement.

From Feb. 17 to Feb. 24, volunteers with the Campus Kitchen at Kent State will compete against 25 high schools and universities to see who will raise the most money to support their local hunger-fighting efforts. Cash prizes totaling $2,500 will be awarded to Campus Kitchens that raise the most money or involve the largest number of individual donors through their online campaign. The Craig Newmark Philanthropic Fund will match every grassroots level donation of $100 or less, up to $7,500. The idea behind the matching donation is to emphasize the importance of inspiring individuals to join the movement rather than focusing solely on the dollar amounts raised.

"Getting people engaged in helping others is a big deal. It's how we'll change the world," says Craig Newmark of craigslist and the Craig Newmark Philanthropic Fund.

At each of the 58 Campus Kitchens nationwide, students lead efforts to combat food waste and hunger by collecting surplus food from on-campus dining halls, community gardens, restaurants and grocery stores and transforming it into healthy meals. In the last academic year, Campus Kitchens across the country rescued more than 1,306,163 pounds of food and served 349,376 meals. Each Campus Kitchen goes beyond delivering meals to develop and implement innovative programs that address the root causes of hunger.

Learn more about the Campus Kitchen at Kent State