A fixture on the Kent Campus since arriving as an undergraduate three-sport student-athlete in 1970, the Canadian native has grown to become one of the most respected golf coaches in the country.

As an undergraduate at Kent State, Coach Page earned eight varsity letters — four in golf and two each in football and ice hockey. He was the golf team’s captain his senior year and the placekicker for two of the most successful football teams in Kent State history — the 1972 Mid-American Conference (MAC) champions and the 1973 team that set a school record with nine victories. In 1974, Coach Page was named the MAC Scholar-Athlete of the Year.

Since becoming head coach in 1978, Coach Page has built a dynasty in the MAC and the legacy grows stronger with each passing year. He has led the Golden Flashes to 21 MAC titles on his watch, and along the way, has garnered 22 MAC Coach of the Year awards. 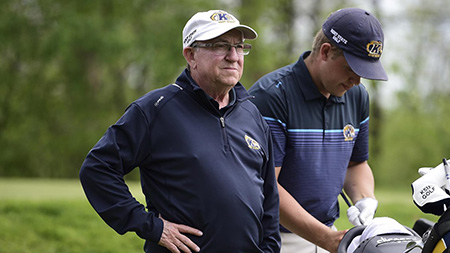 “I really have the Kent State golf program – and my amazing players – to thank for my accomplishments as a coach,” Coach Page says. “Our program is nationally recognized; my players have been successful both collegiately and professionally. This isn’t accidental. We constantly do well because of the winning tradition we have here at Kent State and the respect our program has.”

Associate Head Coach Jon Mills, ’02, who golfed under Coach Page as a student, says Coach Page’s success as a coach is due to his great character.

“Coach Page is a great role model, which is obvious when you see players who come through the program,” Coach Mills says. “He prides himself on his respect for the game and expects his players to do the same. This is why he has a great ability to teach the game. He’s learned a lot about what it takes to be successful in the game and in life, and is great at passing what he’s learned along to his players.”

Chase Johnson, Kent State communication studies major and golfer, says it has been a great experience for him to get to know Coach Page so well throughout his college career.

“As a coach, there is no one better,” Mr. Johnson says. “He's got that fire inside that drives him to win and makes all of his players want to win and get better. He is a coach that would do absolutely anything for any of his players and go out of his way to make sure they have everything they need to succeed.”

As a testament to his successful career at Kent State, Coach Page has been awarded the prestigious coaching position of the international men’s team at the Arnold Palmer Cup, which will take place in July at Evian Resort Golf Club in France. The 2018 Arnold Palmer Cup will mark the first time that men’s and women’s college golfers will compete together. It also will be the first time that the tournament will feature an international team.

“It’s a tremendous honor that I was chosen to coach the first-ever international men’s Arnold Palmer Cup team,” Coach Page says. “I just feel incredibly lucky that I get to do this. What a treat for the players – and what a treat it is for me!”

Stanford University women’s head coach Anne Walker, who will coach the international women’s team alongside Coach Page in the Arnold Palmer Cup, says that Coach Page’s impressive reputation as a coach precedes him.

"I am excited to not only coach alongside Coach Page but also get to know him as a person, coach and ambassador of the game of golf,” Coach Walker says. “Everyone speaks highly of his coaching success and his strength of character. I'm looking forward to hopefully making a wonderful new friend."

Coach Page says that he owes his accomplishments in part to his time spent here at Kent State.

“Kent is my home,” he says. “I have two degrees from Kent State, and I’ve spent the better part of my career as a coach here. It’s been a great place for my wife and me to settle down. And I just couldn't be happier that Kent State provided me with the tools and opportunities to continue to reap rewards like this.”

Coach Page also says that one thing he hopes will come from his Arnold Palmer coaching position is more recognition for the golf program here at Kent State.

“Our men are ranked 21st in the nation, our women are ranked fifth – and not a lot of people know that,” Coach Page says. “We toil in anonymity, but we’d love to make people more aware of the amazing things our golfers are doing – and have been doing for the past 25 or 30 years.”