Jonathan Swoboda, associate professor at Kent State University’s School of Theatre and Dance and a featured keyboard artist with No. 1-selling Christmas artist Mannheim Steamroller, performed with the group at the National Tree Lighting on the Ellipse at President's Park at the White House in November 2017. 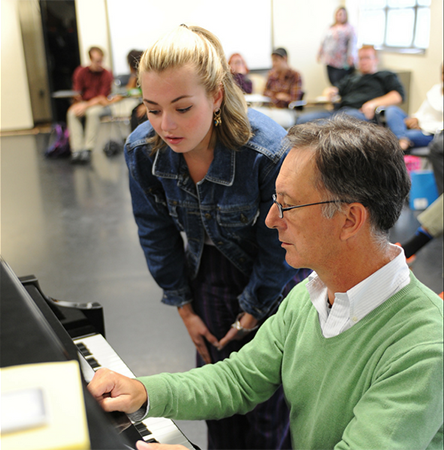 Mr. Swoboda, who began playing with Mannheim Steamroller in 2006, was a student of the group's original featured keyboard artist Jackson Berkey years before.

"I grew up learning and listening to the music of Mannheim Steamroller before it was known for any Christmas music at all," Mr. Swoboda says. "It seemed like a 'natural progression' to have me involved."

Since 2006, Swoboda has performed with Mannheim Steamroller all over the United States, including two years in Branson, Missouri, two 12-week tours, and special weekend shows held between Thanksgiving and Christmas at Universal Studios in Orlando, Florida. In addition to last year's performance at the National Tree Lighting, Swoboda also has performed with Mannheim Steamroller in the Macy's Thanksgiving Day Parade four times and has appeared on Sirius XM Radio and on QVC.

"I think the chance to play with such a renowned music ensemble is a good enhancement to my work as a faculty member of the School of Theatre and Dance," he says. "It keeps me performing on a national and international scale, and aids in keeping me current on cutting-edge performance technology."