Ken Ditlevson, director of Kent State University’s Lesbian, Gay, Bisexual, Transgender and Queer (LGBTQ) Student Center, has been at the university for four years, giving back to a community that once saved his life. In his early years as an LGBTQ youth, Mr. Ditlevson was tormented and even contemplated suicide. His guidance counselor introduced him to the LGBTQ Center of Greater Cleveland, and that gesture helped save his life. Mr. Ditlevson is now doing work that once helped him, and he is appreciative that he can turn around and give back.

His efforts were recently recognized by the Gay Community Endowment Fund (GCEF) of the Akron Community Foundation, which honored Mr. Ditlevson with the Paul Daum Award.

Mr. Ditlevson received the Paul Daum award as a tribute to his work at Kent State in helping to expand outreach for the LGBTQ+ community. The award is named after a founding donor of the fund who was a professor of theatre at The University of Akron. Criteria for the award includes someone who has donated time, talent and treasure to the LGBTQ+ community. Mr. Ditlevson was utterly shocked when he received a phone call announcing that he had won the award. 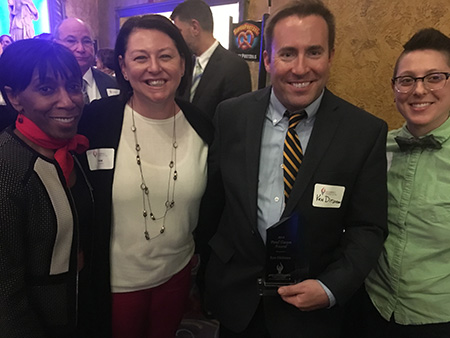 “I was shocked because she said that in their board meeting that day, someone on the board had nominated me, and after a lengthy discussion, I was chosen,” says Mr. Ditlevson. “The Gay Community Endowment fund is part of the Akron Community Fund, and when they raise money for those funds, it is given back to the community to expand the outreach in making Ohio more accepting and knowledgeable with working with LGBTQ+ individuals.”

This award also praises the LGBTQ+ community at Kent State.

“I think that this award says that they believe in what we’re doing at Kent State, and that the efforts that the LGBTQ Student Center has put forth are really making an impact in our community,” says Mr. Ditlevson. “I believe in the work that we’re doing here.”

And administrators at Kent State agree.

“Ken has brought passion, leadership and vision for the LGBTQ Student Center and Kent State overall,” says Dana Lawless-Andric, associate vice president for diversity, equity and inclusion. “We are immensely proud of his work and we are excited to celebrate this well-deserved award.”

“The work is really rewarding, and this is kind of a way to give back to a community that saved me,” says Mr. Ditlevson. “We’re really spreading this education and helping to make our areas more positive for LGBTQ people.”

Mr. Ditlevson is a Kent State alumnus. He graduated in 1995 with a bachelor’s degree in psychology and in 1998 with a master’s degree in education with a focus on community counseling. He also worked at the Kent Student Center when he was a Kent State student.

“When I was a student here working on my bachelor’s, I used to vacuum floors in the basement of the Kent Student Center, and now that’s where my office is,” Mr. Ditlevson says. “So I sort of came full circle.”

For more information about the Gay Community Endowment Fund, visit