Live Chat
Kent State University students gather at the site where one of four slain students was shot on May 4, 1970, during a student protest of the Vietnam War.

U.S. Secretary of the Interior Sally Jewell has announced the designation of the Kent State University May 4, 1970, Site as a National Historic Landmark. The site joins more than 2,500 historic places that bear the national distinction. 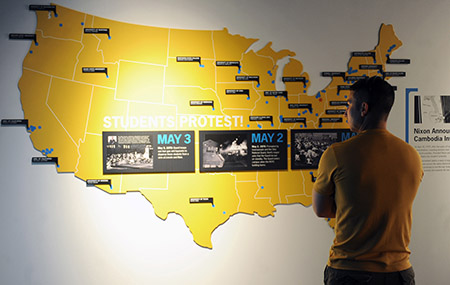 “As we approach the 50th anniversary of May 4, 1970, this recognition compels us to fully claim our status as a global resource and convener of the world’s most critical conversations on peace and conflict resolution,” says Kent State President Beverly Warren. “We are indebted to the team whose tireless commitment resulted in a successful National Historic Landmark application, ensuring the story and lessons of May 4 are regarded and remembered in perpetuity.”

In 1970, student unrest was considered the major social problem in the United States. On May 4, 1970, Kent State was placed in an international spotlight after a student protest against the Vietnam War and the presence of the Ohio National Guard on campus ended in tragedy. Guardsmen shot and killed four students and wounded nine others.

The site covers 17.24 acres of the Kent State campus, comprising the Commons, Blanket Hill, the Prentice Hall parking lot and the Practice Field. The site is an area within which the soldiers, student protestors and an active audience of observers and/or sympathizers moved across a central portion of the campus beginning around 11 a.m. and ending more than two hours later.

The site was placed on the National Register of Historic Places in 2010 as a property associated with events that made a significant contribution to the broad patterns of U.S. history and as a property achieving exceptional significance within the last 50 years.

More than 90,000 properties are on the national register. Only 2 to 3 percent of those properties are awarded the distinction of being named a historic landmark.

“The shootings at Kent State on May 4, 1970, were a singular, unexpected, event,” says Laura Davis, Kent State professor emerita of English and founding director of Kent State’s May 4 Visitors Center. “At the same time, they are part of a fabric that includes the Boston Massacre, Wounded Knee and Edmund Pettus Bridge. The Department of the Interior recognizes such enduring places as National Historic Landmarks so that people can make meaning during their own times of the broad patterns in U.S. history.”

Davis was a freshman on campus during the 1970 events. Working with university and community members, she co-led the creation of the May 4 Visitors Center, dedicated in 2013, as well as an audio-guided walking tour of the May 4 historic site, dedicated during the 40th anniversary. The center is now lead by historian Mindy Farmer.

While historic sites are not typically granted National Historic Landmark status until they reach at least 50 years old, the Kent State Board of Trustees requested that its nomination be considered in time for the 50th commemoration of the shooting in 2020.