It’s a tale as old as time — the fierce rivalry between the Kent State University Golden Flashes and the University of Akron Zips. No one knows how this rivalry began. Maybe it’s because the 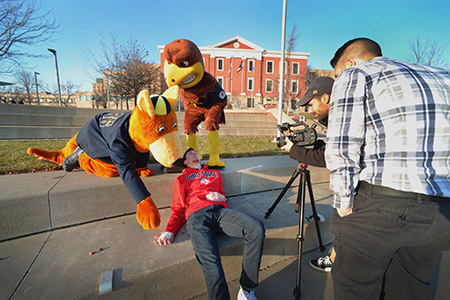 schools are so close to each other; perhaps it’s because they are in the same conference.

Or maybe it’s because of a love affair gone wrong.

On Feb. 13, both Kent State and the University of Akron released videos on their respective social media pages, explaining that the schools’ sports rivalry began after the mascots, Flash and Zippy, tragically ended their blooming relationship.

“I grew up in Kent and never really understood the rivalry, so when I started at Akron, there was a lot of room to poke fun at how deep the rivalry goes,” Meeker says.

Her idea: Flash and Zippy — who is one of only three female mascots in the MAC Conference — had once been in love with each other, but a bad breakup created a feud between the schools that would last forever.

Meeker contacted Nicole Losi, Kent State’s social media director, in hopes of collaborating on a video project to tell the story of the school’s rivalry.

“I loved the idea,” Losi says. “We’re hoping to engage students on social media and show a healthy and fun rivalry online. It’s a way for our students to see how the rivalry began in the eyes of Flash and Zippy.”

“The basketball teams had a game during the week of Valentine’s Day, so we thought a romance story would be great,” Meeker says.

Kent State videographer Dustin Lee was eager to join the project and helped direct the scenes on Kent State’s campus.

“Each video is meant to mirror each campus, so each scene happens at each campus but from a different perspective,” Lee says. “It made sense to film on both campuses to appeal to each of our fan bases.”

As of Feb. 24, the video had been viewed more than 73,000 times on Facebook, retweeted 146 times on Twitter and was broadcasted twice on WOIO Cleveland 19 News. The two broadcasts generated a local viewership of 106,553 people. ESPNU also showed both videos at halftime during its Feb. 17 broadcast of the Kent State and Akron matchup, which generated a viewership of 34,638 people. The story also was picked up on cleveland.com and ohio.com.

Students and alumni at both schools have reacted positively to the videos. Other students at schools like Bowling Green State University and Ohio State University, both of which were mentioned in the videos, joined in on the fun, commenting and sharing the videos as well.

Both Meeker and Losi noted that the rivalry between the schools is strictly a sports rivalry.

Some of those programs include the Doctor of Audiology degree and the Doctor of Medicine degree in which students attend both universities and collaborate on projects.

“There’s a lot of room for growth, and we hope to continue the series,” Losi says. “We’ve talked about different video ideas for the future and potential ways to incorporate the Crystal Clinic Wagon Wheel Challenge.”