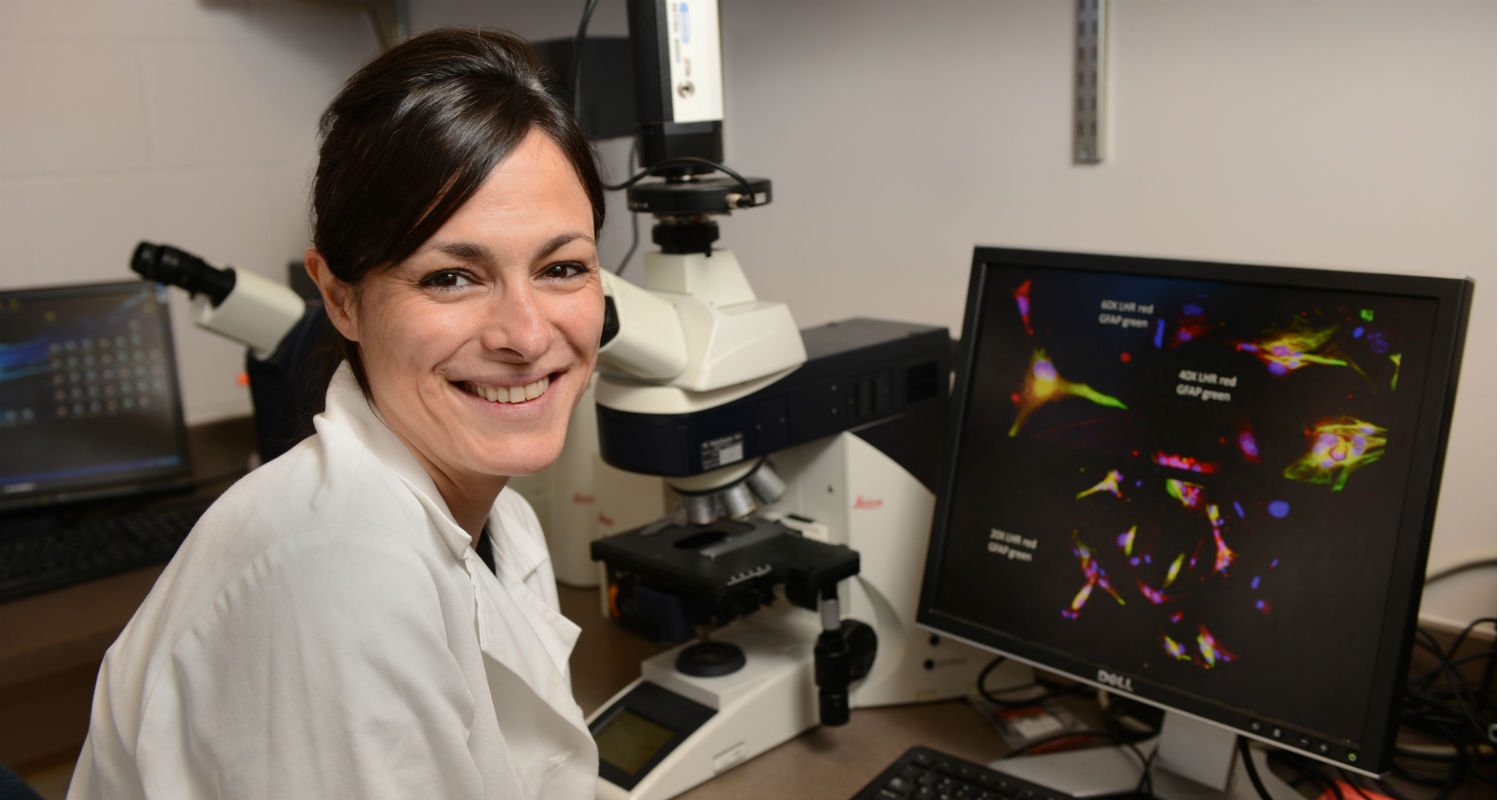 For decades, biologists researching a cure for Alzheimer’s disease have remained in the dark almost as much as the ailment’s victims.

A Kent State University professor, however, is looking to stop the disease before it starts.

Gemma Casadesus-Smith, Ph.D., an associate professor of biology in the College of Arts and Sciences, studies Alzheimer’s through the lens of the aging process.

“In my lab, we’re trying to understand how age-related events can cause Alzheimer’s disease,” she says. “My work is not in treating existing illness but in preventing it.”

There are two types of Alzheimer’s: age-related and genetic. Casadesus-Smith’s research focuses on age-related Alzheimer’s and the hormones she believes are directly tied to its onset.

“Most Alzheimer’s patients, by the time they show symptoms, have had it for 10 or 15 years already,” she says. “The small changes the disease causes start earlier than we can detect.”

Casadesus-Smith says many people between the ages of 75-85 will eventually begin to develop symptoms of Alzheimer’s. Her hope is to understand related hormones well enough to delay the disease long enough to preserve quality of life.

“If we can delay it by five years, we effectively cure 50 percent of cases,” she says. “People may have Alzheimer’s when they die of old age, but if we delay it enough, they’ll reach the end of their life with full cognitive capabilities.”

Casadesus-Smith says women are more likely to develop Alzheimer’s than men, by a 3-2 to margin, largely because of the effects of menopause on the human brain.

When women reach menopause, their bodies cease to produce estrogen, rendering the ovaries defunct. Casadesus-Smith says that when this happens, the pituitary gland begins overproducing luteinizing hormone to try to jump-start the ovaries.

Women in menopause often attempt hormone replacement therapy to reduce or eliminate the stressful effects, by replacing the estrogen in their bodies. But at advanced ages, estrogen is no longer of benefit to the body and will damage neurons, raising the risk of dementia and Alzheimer’s, and increase the risks of stroke, breast cancer and cardiovascular disease.

However, rising levels of luteinizing hormone have the same damaging effects as estrogen on neuron plasticity – a key factor in cognitive health.

By reducing the amount of luteinizing hormone being produced, Casadesus-Smith says women may be able to enjoy reduced severity of neuronal menopause symptoms and sustained cognitive function without the dangerous side effects of estrogen replacement.

The other side of her work deals with how the brain processes glucose. Alzheimer’s also is prevalent among obese people and those who already have diabetes.

“In the last 10 years, many researchers have started viewing Alzheimer’s as Type 3 diabetes because the brain becomes bad at using glucose,” Casadesus-Smith says.

The theory is that the cessation of insulin signaling in the brain and reductions in glucose usage are predictors of Alzheimer’s. Two particular metabolic hormones – leptin and amylin – activate the insulin function systems that help the brain use insulin efficiently to process glucose.

Both hormones also have been shown to directly affect cognition.

Casadesus-Smith’s research uses mouse models of Alzheimer’s disease in which the hormones are administered either directly to the hippocampus or systemically, to determine how they affect insulin usage and sugar processing, and what effect they have on cognition and Alzheimer’s disease pathology.

“We start by seeing if it works, then work backward and ask how and why it works,” she says. The implications of the work, if successful, are clear, she says. “You can create novel therapies, new, more efficient peptides to target that.”

Casadesus-Smith says that, as opposed to a disease, Alzheimer’s is likely more of a syndrome caused by a battery of different negative events but with a collective overall result: neuronal death, development of pathology and consequent loss of cognitive function.

“For this reason, it will be near impossible to find a single treatment to cure it,” she says. “The idea is not to wait until you have Alzheimer’s. It’s to start these therapies now in at-risk populations so that we can mitigate these multiple pathological foci.”