Live Chat
Torsten Hegmann, Ph.D., a chemical physics professor and Ohio Research Scholar in Kent State University’s Liquid Crystal Institute®, recently was named a fellow of the Royal Society of Chemistry, one of the top publishing societies in chemistry worldwide.

Torsten Hegmann, Ph.D., a chemical physics professor and Ohio Research Scholar in Kent State University’s Liquid Crystal Institute® in the College of Arts and Sciences, recently was named a fellow of the Royal Society of Chemistry, one of the top publishing societies in chemistry worldwide. 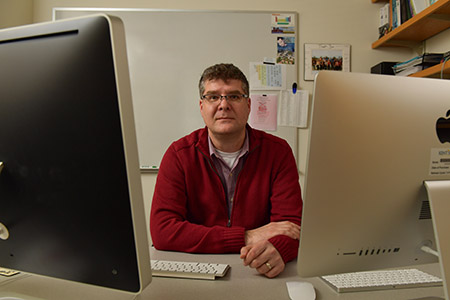 “It was a tremendous honor being included in the list of fellows of the Royal Society of Chemistry (RSC),” Hegmann says. “The list of admitted fellows every year contains names of very innovative, leading chemists – many of whom I am looking up to as I pursue my own research. To appear among them is incredibly rewarding and to a large degree due to the hard work of the students and postdocs, past and present, working in my laboratory.”

Hegmann’s admittance was based on his contributions to the field of chemistry, specifically advanced nanomaterials. His research group focuses on multiple projects funded by the National Science Foundation (NSF), NASA, Merck (Germany), LG Display and the Canadian Institute for Health Research (CIHR). These projects center on interactions of various types of nanomaterials with their environment.

Depending on the study, the environments could be anything from liquid crystal phases and defects to brain endothelial cells to toxic chemicals.

“These environments allow us to visualize and measure chirality amplification by nanoparticles capped with optically active (chiral) molecules, study liquid crystal defects in a zero-gravity environment on the International Space Station, develop more effective platforms for brain drug delivery past the blood-brain barrier (combatting stroke, brain tumors and other neurodegenerative diseases) or detect toxic gases and vapors in the environment (that are harmful to fire fighters, military personnel in conflict zones and many others),” Hegmann says.

Hegmann joined the Kent State University faculty as an associate professor and Ohio Research Scholar in Science and Technology of Advanced Nanomaterials in 2011. He previously worked as a professor at the University of Manitoba for eight years following a postdoctoral fellowship at Queens University in Canada. He earned his doctorate in 2001 from Martin Luther University in Germany. He has organized or co-organized several recent symposia and conferences, including the Chirality at the Nanoscale Symposium, Gordon Research Conferences on Liquid Crystals and the 2015 PacifiChem. He has served on the editorial board of the journal Crystals and is the chief scientific officer of Blood Brain Biotransport LLC.  A few of his other major awards and honors include the 2016 Merck Displaying Future Award, CNC IUPAC Award and the Ichikizaki Award among others.

The Royal Society of Chemistry, founded in 1841, is the United Kingdom’s professional body for chemical scientists and the largest organization in Europe for advancing the chemical sciences. The society partners with industry and academia, promotes collaboration and innovation, advises governments on policy and promotes the talent, information and ideas that lead to great advances in science.