When residents returned home, many were met with the unimaginable reality – everything they owned was gone. Many even lost their jobs. More than two months has now passed, and according to the Catholic Charities Diocese of Palm Beach, a growing number of people are falling behind on their monthly bills. Catholic Charities Recovery Centers say families that are without an income struggle to pay for the basic essentials, including food and clothing. 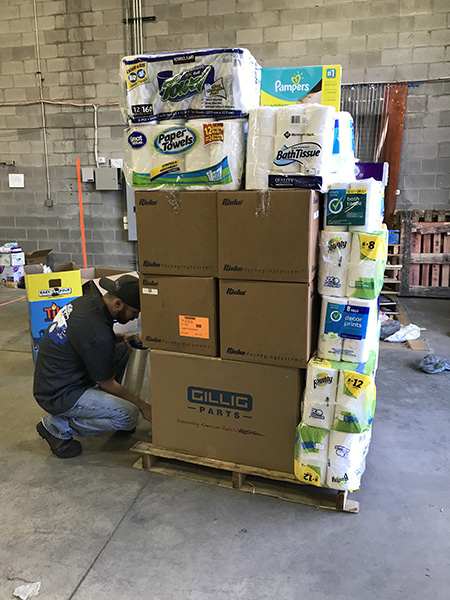 In an effort to help meet growing needs, Kent State University and community partners teamed up to create a hurricane relief supply drive through much of October. Collection bins were strategically placed across the Kent, Ashtabula and Geauga campuses, as well as the Regional Academic Center in Twinsburg.

With direction from Amanda Paulus, director of Kent State’s Office of Experiential Education and Civic Engagement, students joined staff and area citizens to sort and fill pallets with 350 pounds of donations, ranging from diapers to paper products, plastic utensils and essential clothing. The warehouse and truck used for storing and transporting the donations came from the generosity of Sharlene Ramos-Chesnes, Kent State alumna and CEO of InterChez.

“This was a real team effort that came together in a very short period of time,” says Geraldine Hayes-Nelson, Ph.D., who created and led the drive in response to concerns expressed by a number of Kent State employees.

The donations went to St. Mary’s Catholic Church in Pahokee, Florida. The town is known for a diverse workforce that helps harvest sugar cane, a crop significantly affected by the hurricane. The U.S. Department of Agriculture estimates $2.5 billion in damage throughout the state, including Pahokee. Consequently, many workers have been out of work since the hurricane hit.

“These contributions will go a long way toward making sure individuals and families impacted by Hurricane Irma can meet their basic needs as they try to get their lives back on track,” says Kelvin Berry, director of economic development and community engagement for Kent State’s Office of Government and Community Relations, who helped coordinate the drive.

Mr. Berry and Dr. Hayes-Nelson say that collecting items for the hurricane relief supply drive was a collaborative effort and would not have been possible without the extensive partnership with the Kent Chamber of Commerce, Family and Community Services, Fab Express, PARTA, City of Kent Community Development and Health departments, International Paper, Mt. Calvary Baptist Church, the Kent Interfaith Alliance and University Facilities Management.