Skip to main content
Live Chat
Four students were killed and nine others wounded during a student protest of the Vietnam War. The site was formally dedicated as a National Historic Landmark on May 4, 2018.

Kent State to Dedicate May 4 Site as National Historic Landmark

Seventeen acres on the Kent State University campus denote the location of the historic events of May 4, 1970, where protesting students, observers and soldiers gathered on that fateful day when the Ohio National Guard shot and killed four students and wounded nine others.

In 2010, the May 4 site was placed on the National Register of Historic Places for being associated with events that contributed significantly to U.S. history. Then in 2016, Kent State’s May 4 site was designated a National Historic Landmark by the U.S. Secretary of the Interior, joining more than 2,500 historic places with this national distinction. Several properties are placed on the national register, but only a small percent are awarded the distinction of being named a historic landmark. 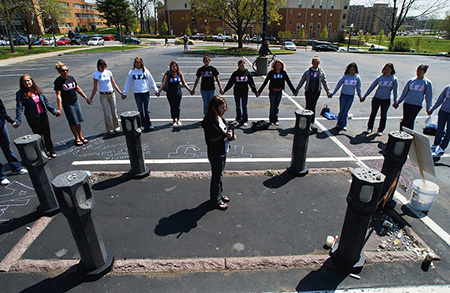 On Friday, May 4, Kent State will formally recognize and celebrate this National Historic Landmark designation during a special dedication ceremony at the Honors College Plaza at 3:30 p.m. The event, which is part of this year’s May 4 Commemoration, is free and open to the public. Attendees are asked to register online.

Other speakers include Kent State Professor Emerita Laura Davis, Ph.D., founding director of Kent State’s May 4 Visitors Center and a freshman on campus during the events of 1970; Kent State Professor Emeritus Mark Seeman, Ph.D., who spearheaded the application to add the May 4 site to the National Register of Historic Places; and Lisa Petit, Ph.D., chief of resources stewardship for Cuyahoga Valley National Park.

The ceremony also will feature the unveiling of a plaque to officially dedicate the site as a national landmark by President Warren, members of the Kent State Board of Trustees, the May 4 Task Force and the National Park Service.

Self- and expert-guided tours of the May 4 site and May 4 Visitors Center will take place following the ceremony.

The May 4 site includes the Kent State Commons, Blanket Hill, the memorial, the Prentice Hall parking lot and Practice Field. While several properties are placed on the national register, only a small percent of the properties are awarded with the distinction of also being recognized as a historic landmark.

In the event of inclement weather, the dedication ceremony will take place at the Kent Student Center Kiva.

For more information about May 4, visit www.kent.edu/may4.