A shaved head can represent many things, but to some people, including Lisa Morde, coordinator of Community Engaged Learning in University College, a shaved head represents more than what meets the eye.

Ms. Morde, who shaved her head for the third time since 2001, feels so deeply about gender and racial equality and enacting positive social change that cutting off all her hair is a way to show her support for each cause. 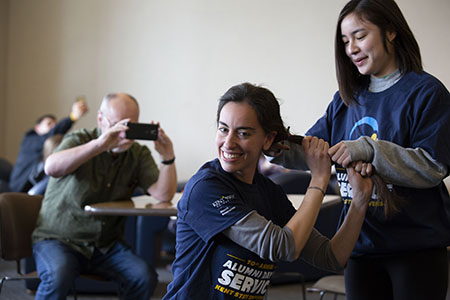 “The first time I shaved my head, I was thinking deeply about how gender roles are prescribed and maintained,” says Ms. Morde.

Many people view her differently when she shaves her head, she says. She feels it calls into question many different social norms when people see a woman with a shaved head. Hair, especially long hair, is often seen as the standard of beauty for women and even an essential part of being female.

“There are assumptions about my sexual orientation and even my gender identity based solely on my hair or lack of hair. I love the opportunity to get people to question their assumptions and reconsider what is normal,” Ms. Morde shares as her inspiration for shaving her head.

Ms. Morde was inspired, again, a few years later based on racial inequality to shave her head for the second time.

After thinking about cultural standards of beauty and professionalism that exclude women of color based on their hair, she felt the need to use her voice to share this message. She says white women with long, straight hair are often the standard of beauty, and she feels more voices of women of color need to be heard.

“It is important to me to use my privilege to disrupt this and encourage others to question it,” says Ms. Morde. “Hair is such an important part of culture and a powerful marker.”

“Unfortunately, there have been some demonstrations in just the last couple of years where the value judgement has resulted in adverse actions taken against women,” Dean Pringle says. 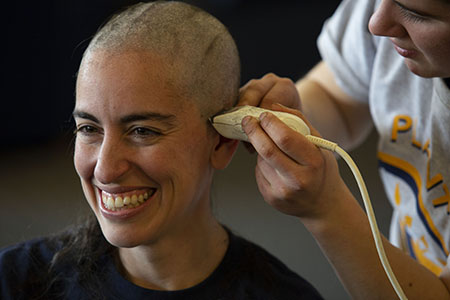 Dean Pringle referred to a recent situation where two African-American girls were banned from their high school prom and extracurricular activities due to their hair being in braids. In addition, another woman’s offer of employment was rescinded by a company because a human resource staff member felt her dreadlocks would be messy.

“These situations call into question the way in which hair type and style are valued in our society and whether this should be a determining factor in the participation of individuals who choose options that are not generally celebrated by our society,” Dean Pringle says.

She hopes these situations will encourage national dialogue about what society values, why our society holds that value and whether that value is appropriate.

“I am pleased that Ms. Morde is getting into this conversation and searching for ways to encourage further dialogue on campus and in our local community,” Dean Pringle says.

The reasoning behind Ms. Morde’s third head shaving was to raise money for Habitat for Humanity in a campaign called “Shave My Head to Put a Roof Over Her Head.”

She is the advisor for the Kent State chapter.

Behind this campaign, Ms. Morde says shaving her head is a small act she can do in the bigger plan of enacting positive social change.

The fundraiser raised funds for a house to be built in Kent for a family in need. Ms. Morde and the Kent State Habitat for Humanity chapter raised more than $2,138 during the campaign.

Through all of these efforts, Ms. Morde wants to start conversations about social change and then go beyond words to actions.

“I strongly believe that the way to bring about social change is through a multiprong approach,” Ms. Morde says. “It includes charitable giving: donating my hair to make wigs for women experiencing hair loss due to cancer treatment; philanthropy: raising money for our local Habitat for Humanity; and raising awareness of how cultural norms devalue and restrict people based on race and gender identity.”