Live Chat
Kent State University students make their way to their seats for their Commencement ceremony.

Kent State University will celebrate its newest graduates at its Spring 2017 Commencement ceremonies. In total, Kent State will confer 5,636 degrees, including 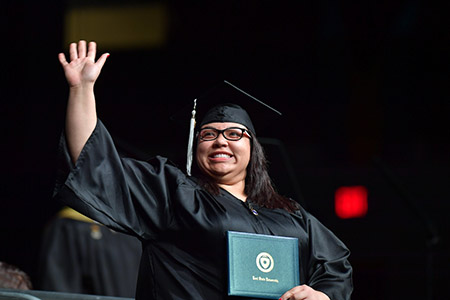 The One University Commencement Ceremony will take place Saturday, May 13, at 10 a.m. in Dix Stadium. This ceremony will mark the first time all graduates from the eight-campus system are convened and honored in one ceremony. All Kent State students and their families will celebrate the occasion together.

Academy Award-winning actress and author Octavia Spencer will serve as the keynote speaker for Kent State’s first One University Commencement Ceremony. Best known for critically acclaimed starring roles in films such as The Help, Hidden Figures and The Shack, Ms. Spencer also is the co-author of two children’s books. Her acting roles highlight stories of perseverance and tenacity that motivate and inspire audiences of all ages. Ms. Spencer’s mother, Dellsena, worked as a maid, and Ms. Spencer, the sixth of seven children, earned a bachelor’s degree from Auburn University. Ms. Spencer has said that she loved playing characters that have “a voice and an opinion” and were proactive in bringing about change in their communities, “ordinary women who were heroes.”

Ms. Spencer won the Academy Award, Golden Globe, Screen Actors Guild, British Academy of Film and Television Arts and Critics’ Choice Movie Award for Best Supporting Actress as the feisty and unflappable Minny Jackson in the film The Help. She also received Academy Award, Golden Globe and Screen Actors Guild nominations for her most recent role as mathematician Dorothy Vaughan in the drama Hidden Figures, the true story of several African-American mathematicians at NASA who were critical to the success of the space race in the 1960s. In honor of Martin Luther King Jr. Day, Ms. Spencer bought out a Los Angeles screening of Hidden Figures to treat low-income families who would have otherwise not been able to see the film.

The One University Commencement Ceremony is in addition to the college ceremonies currently hosted each spring at the Regional and Kent campuses. At these college and Regional Campus ceremonies, students will continue to have the opportunity to be personally recognized as they cross the graduation stage. The advanced degree commencement ceremony for the Kent Campus will take place Friday, May 12, at 6 p.m. in the Kent State Field House. The baccalaureate degree commencement ceremonies for colleges on the Kent Campus will occur May 13 at 2 p.m. and 3 p.m. at four campus locations. For more information about the times and locations of the ceremonies, visit www.kent.edu/commencement. The advanced degree and baccalaureate degree ceremonies for the Kent Campus may be viewed live at www.kent.edu/commencement/webcast.