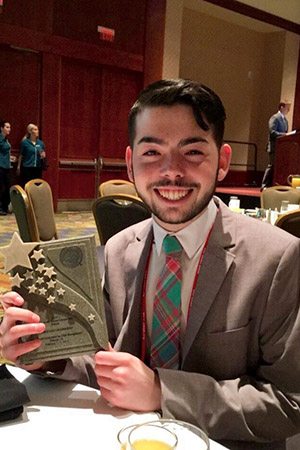 Ashtabula and Kent campuses who are interested in the private country club industry.

Each year, the CMAA World Conference hosts the Club of the Future award program, which allows student members to propose an idea of what they could see the club industry looking like five, 10 or 15 years in the future.

Thirty-six student members make up the Kent State chapter. Of those, 17 members, including nine students from Kent State Ashtabula and eight from the Kent Campus, created a poster for their Club of the Future idea, “Same-Sex Private Clubs: A Product of Forward-Thinking Leaders.”

The concept, spearheaded by Kent State CMAA Chapter Secretary Martin Shutzberg, envisions a private club that caters to the needs of same-sex couples, families and other members of the LGBTQ community. The 2015 Supreme Court Ruling, which legalized same-sex marriage, was a huge influence in the creation of the concept, Shutzberg says.

“As a result, these newly married couples are beginning their families and are looking to do so in a safe space that not only welcomes but embraces the LGBTQ community,” Shutzberg says.

The project was an overall collaboration with specific focus areas for each campus group. Students at Kent State Ashtabula worked on a locker room concept, while the Kent Campus group refined the concept of the project as a whole.

“Our students designed the diagram for a new vision for a locker room setup and thought about what type of events would be held at this new club,” says Kent State Ashtabula advisor and professor Mandy Ulicney.

Ulicney encouraged the students to not only think about creating an entirely new club, but also consider ways to improve current clubs.

“So the project is a two-step approach," Shutzberg says. "The first approach is the creation of a new club that serves primarily to meet the needs of the LGBTQ community. The second approach serves to show ways in which existing clubs can take elements of our proposed brand-new club to make their existing clubs more welcoming to LGBTQ community members.”

Barbara Scheule, Kent Campus advisor and professor, says that while the private-club industry is conservative, she saw a lot of potential in the students’ idea.

“Their proposal was bold given the conservative nature of many private clubs, but it also speaks to the spirit of this award, which is to envision the future,” Scheule says. “Millennials as a generation embrace differences, and I believe clubs will be examining their policies to be able to attract millennial members.”

After winning the award, Shutzberg and teammate Rachel Raught gave a 10-minute presentation to club managers and students for further explanation of the project and took questions from the audience.

“It was really well-received by the club managers; lots of questions were asked,” Shutzberg says. “People were intrigued by the concept. It was something that had never been proposed before.”