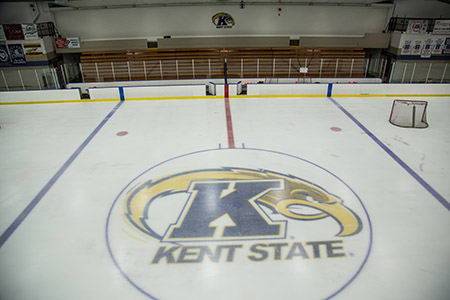 speed skaters from all over the state.

The Kent State Ice Arena has been hosting skating competitions for the Winter Games for each of the 32 years that the Ohio Special Olympics has held those events.

“It’s important to us that the organization and the athletes are treated well every year,” says ice arena Manager Bill Switaj. “It’s such an amazing event, and we work to make sure that it’s done right.”

“All of our judges are qualified at a national level,” Vermillion says. “We strive to make the experience for our athletes as authentic as possible.”

Vermillion says the Winter Games come together every year solely because of the people, many of whom are from the Kent State community, who volunteer to work the event.

“Ninety-five percent of the people here are volunteers,” Vermillion says. “We are always amazed at not only how many people show up to help, but also how many of them are from the university. Students volunteer to be trainers, to help set up before the event and to work as medical personnel if someone gets injured. We are incredibly grateful.”

Competitor Shaye Taylor, who took first place in the speed skating competition, says that Special Olympic Games are the perfect showcase for her to show off her talent.

“When I skate, it’s like there’s a fire in my soul that appears, and I become a phoenix,” Taylor says. “I’m grateful that every year I can come here and experience that.”

Throughout the year, the arena also offers a multipurpose meeting room, skate sharpening and a full-service snack bar, which accepts Kent State FLASHcards. The ice arena is home to the Kent State ACHA Hockey Team and the Kent State Figure Skating Team. It is also home to six area high school teams, a figure skating club and a youth hockey program.

Learn more about Ohio Special Olympics and its upcoming events