Each year, the American Mock Trial Association constructs either a criminal or civil case that is used by the mock trial teams located at colleges and universities throughout the United States. The team members play attorney or witness roles, and after considerable preparation, they take part in competitions at various colleges and universities. The 2016 criminal case focused on “white collar” crime. A political figure was accused of accepting a bribe from a gambling casino owner in exchange for granting a license to build a new casino. 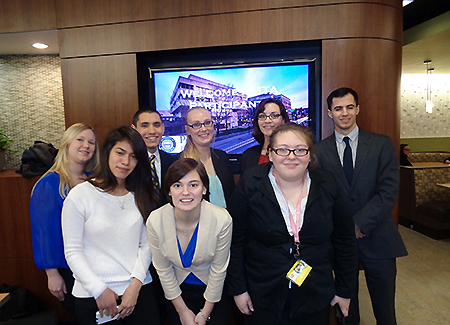 The Ohio Northern Competition served as a warm-up for the regional competition that was held at the University of Pittsburgh Law School in February.

The American Mock Trial Association was founded in 1985. Presently, the association hosts 25 regional tournaments as well as a national tournament. More than 350 universities and colleges participate in tournaments during the year, providing an opportunity for more than 5,000 undergraduate students to compete.

Although the Kent State team was very competitive against such universities as the Pennsylvania State University and the Ohio State University, the team did not advance to the next level of competition.  However, several Kent State team members received recognition from the judges for being the top attorneys or witnesses in the trials in which they participated.

“The mock trial provided a wonderful learning experience, as well as an opportunity to challenge myself as an individual and as part of a team,” says Van’t Hooft, a Kent State sophomore accounting major and para-legal studies minor. “Also, I was able to develop important skills such as critical thinking, public speaking, and how to react under pressure.”

“Mock trial is one of the greatest ways for students interested in law to get a real taste of what it takes to be a trial attorney,” says Kindel, a sophomore political science major. “This was one of the best and most rewarding experiences of my life.”

Kent State has participated in American Mock Trial tournaments for more than 15 years. Kent State’s Department of Political Science, under the initiative of Thomas Hensley, Ph.D., Professor Emeritus of political science, developed an experiential course, and with assistance from the College of Arts and Sciences, has been able to send a team to an American Mock Trial Association competition each year.

Students who completed the Political Science Trial Practicum course and participated in mock trial competitions generally reported that they had a very rewarding learning experience. The fact that the cases and the trials approximate “real life” courtroom drama increases their desire to prepare, practice and sharpen their reasoning and communications skills. When they are in the courtroom setting, using logic and persuasion to argue various points of law, they soon forget that it is not an actual case.

“This experience has been challenging, but also a great way to continue to develop my public speaking skills and law skills,” says Hamilton, a freshman political science major.

The mock trial judges have considerable knowledge of the law, and they usually are practicing attorneys or court judges. This heightens the courtroom drama. The fact that these mock court judges volunteer their time for the entire competition weekend reflects the dedication they have to making the mock trial competition a rewarding learning experience for the students who participate. When the trials are completed, the judges discuss the performances of the teams and answer questions posed by members of the teams.

Wazevich, a senior psychology major and pre-law minor, says that the mock trial was an amazing experience that allowed her to develop skills that she will take with her for the rest of her life. Hoag, a junior criminology and justice studies major, also adds that it was a great team-building experience.

Kent State’s mock trial team is open to students in all majors. Currently, the students enroll in Political Science 40993. During the fall semester, the coaches prepare the students for competition through classroom instruction and training sessions. In the spring semester, the students have practice competitions against other universities to prepare for the regional tournament.  However, starting in fall 2016, a two-course sequence is planned. Students who enroll in a 2-credit course offered during the fall semester will have an opportunity to learn about litigation and trial procedures, and those students who decide to participate in the Mock Trial Competition will have an opportunity to enroll in a 1-credit course offered during the spring semester.

Kent State Receives State Education Grants
Kent State University was awarded nearly $1 million in grant funds from the Ohio General Assembly to allow universities to develop programs and...
Legal Brief: Political Campaigning on a Kent State Campus
“Legal Briefs” appears in e-Inside to keep faculty and staff informed of legal issues and their implications. An archive of past Legal Briefs is...
2016-2017 Faculty/Staff Online Parking Permit Renewals
Online faculty/staff parking permit renewals will be available now through May 13. After May 13, permits can be purchased in person in the Parking...
e-Inside
Street Address
University Communications & Marketing