Viral tweets are circulated around the internet every day. Whether they are entertaining, infuriating or moving, they usually evoke some type of strong emotional response, which is how they become viral.

Eli Kalil, a junior applied communications major at Kent State University, saw just how powerful the tool of social media can be when he posted an inspiring tweet involving his mother in late January.

“My mom has tried several times to quit smoking, but none of them have been successful,” Mr. Kalil says. “So, I decided to make a bet with her.”

He decided to take a photo of himself and his mother, Andrea Kalil, shaking hands as he holds a pack of cigarettes in the other hand, pleading with his followers to help encourage his mother to stop smoking. 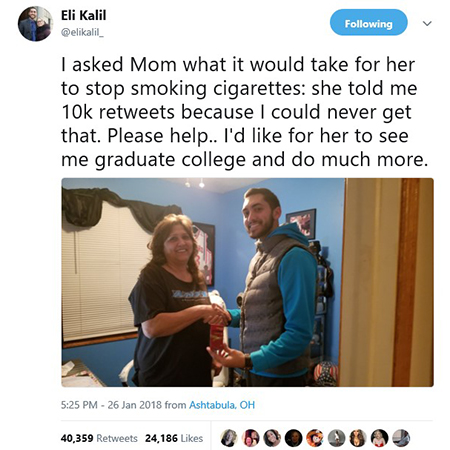 What started out as a joke to gain 10,000 retweets in order for Mrs. Kalil to quit smoking quickly snowballed into a movement as the tweet hit nearly 10,000 retweets within a few hours. Fast-forward a couple days later, and it had already accumulated 40,000 retweets, more than 1,600 replies, and even a few responses from some powerful influencers in sports and Hollywood.

“I was only expecting to get around 1,000 retweets, since I have a pretty good following on social media,” Mr. Kalil says. “But it really blew up after Rosie O’Donnell retweeted it and followed me.”

Shortly after, Frank Sinatra’s daughter, Nancy Sinatra, and Olympic medalist Kara Goucher also responded to Mr. Kalil’s plea, both with words of kindness and encouragement. Even Mrs. Kalil has seen the impact of her son’s tweet from her own Twitter account, where she has responded to countless replies wishing her luck as she begins her journey.

Mr. Kalil claims she is having more success now than with her previous attempts.

“She used to smoke over a pack a day,” Mr. Kalil says. “Now she’s down to five or six cigarettes and started using an e-vape.”

As his mother constantly keeps him updated on her progress, he also keeps his followers up-to-date through Twitter for everyone who is curious on how she is doing.

Both his parents have smoked for as long as he can remember, although his father smokes much less than his mother does.

“My father’s more of a stress-smoker,” Mr. Kalil says. “He doesn’t do it as much, but I’m trying to get them to quit not only for me, but for themselves since I believe smoking plays a role in their current health issues.”

As an only child, Mr. Kalil expressed his desire for his mother to live long enough to see him graduate and achieve much more in the future. He has a strong support system throughout his family and community, who continue to be his inspiration every day.