Police officers rarely find out how victims are doing after a crisis. In most crisis situations, they deal with the immediate threat and move on. But Kent State University Police Officer Anne Spahr recalls the moment when she knew she had saved a life.

A young woman, who previously suffered from suicidal behavior, approached Officer Spahr at the Kent Student Center and graciously thanked her for helping with her mental breakdown. It was a moment that she will never forget. 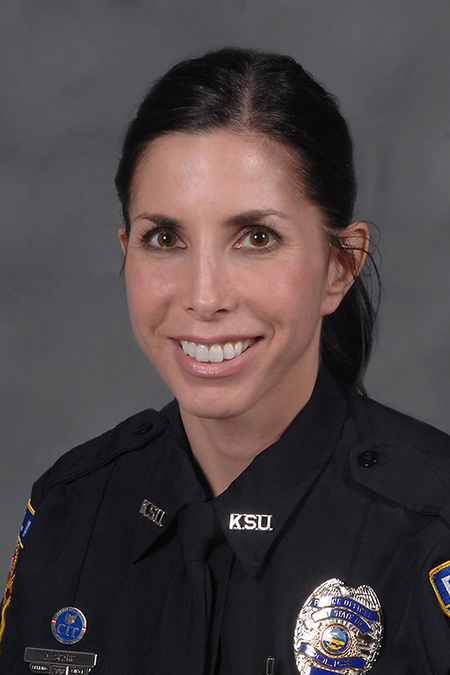 Officer Spahr is one of two K-9 officers at Kent State who has saved lives — both mentally and physically — on numerous occasions.

“I went through a 40-hour course during my CIT training,” Officer Spahr says. “We learned about mental health, local services and crisis intervention.”

Officer Spahr had her eye set on law enforcement early on in college. She worked in crisis intervention for Town Hall II in the early ’90s and earned her degree in psychology from Kent State. She also worked for a suicide hotline, victim advocacy and lived in England for seven years helping victims of mental health and abuse.

“In crisis intervention, we answer a high volume of calls and deal with everything from addictions to relationship issues, sexual assault and suicide attempts,” Officer Spahr says. “Each person has a need, so it’s our job to show sensitivity toward people to remain safe.”

There are certain attributes that an officer must have to successfully de-escalate a dangerous situation, including good communication skills and being able to earn the people’s trust. These are two traits that Officer Spahr seems to have mastered over the years.

“This is a difficult field to pursue,” Officer Spahr says. “You have to keep an open mind and set aside judgment when you’re answering these calls because it’s hard enough for the victims to show their vulnerable sides to a stranger.”

However, Officer Spahr passionately believes that everyone can benefit from CIT training, not only professionally, but also in their personal lives with family and friends.

“Just knowing that I’ve helped someone else and possibly saved a life is rewarding enough for me.”

For more information about the Crisis Intervention Team, visit www.kent.edu/publicsafety/crisis-intervention-team.