Dredging the Cuyahoga Will Clean River Sediment of Petroleum, Improve Water Quality Along Hike and Bike Trail in Kent Park

Members of the Kent State University community who enjoy kayaking along the Cuyahoga River or taking a walk or jog along the adjacent Portage Hike and Bike Trail may have noticed the river dredging work near Fred Fuller Park in Kent.

The work, which began in September, is expected to take about three months. The aim is to remove petroleum that causes a sheen on the top of the water. 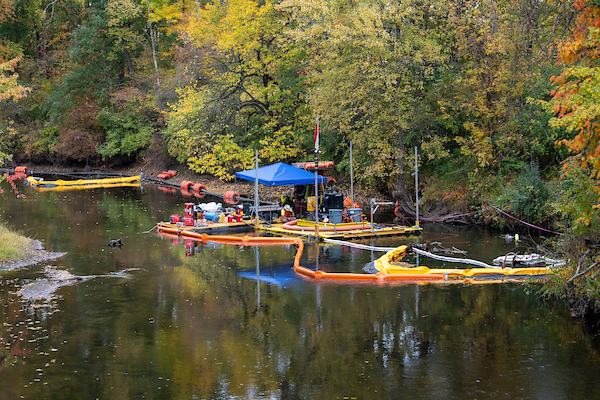 Bridget Susel, director of community development for the city of Kent, said the work is part of a long-standing environmental cleanup from a former industrial building located upstream at 800 Mogadore Road. The building is long gone, but environmental issues on the land remain, she said.

Because the area is used daily by members of the university and the greater Kent community, the city placed signs along the walking path that contain a QR code that visitors can scan with their phones to learn more about the dredging project. 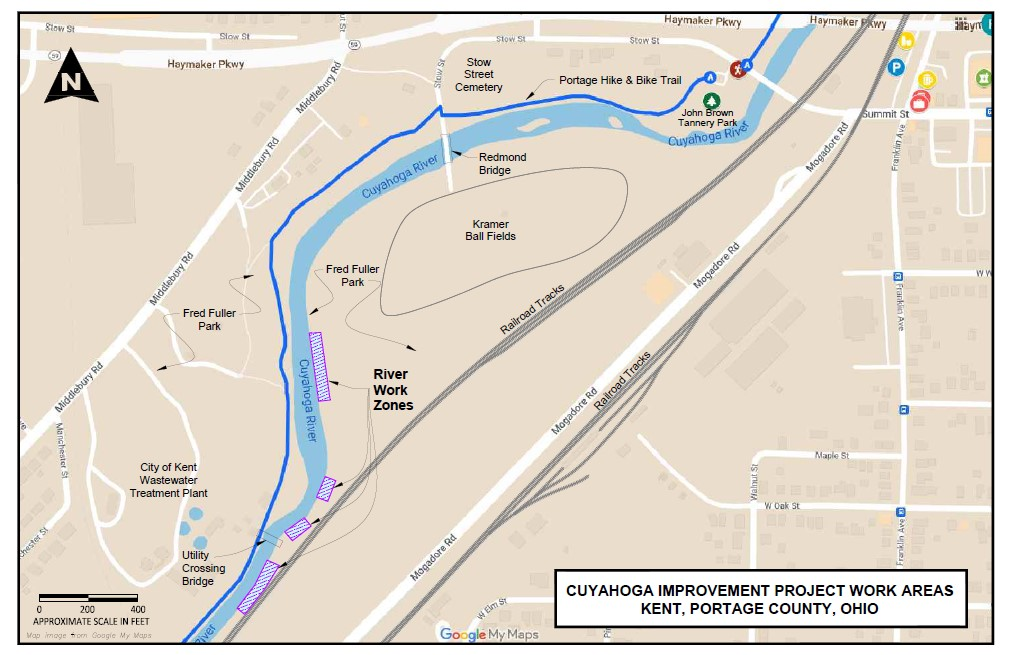 “We have a ton of Kent State students walking down there,” Susel said, noting how visitors may want to learn more about the work.

Joshua Rider, executive director of Kent State’s Center for Adult and Veteran Services, and Rose Penix, an instructor in the College of Public Health, frequently walk on the trail over their lunch hour. They commented on how they had been wondering what type of work was going on along the riverbank.

“I finally made him scan the QR code,” Penix said. 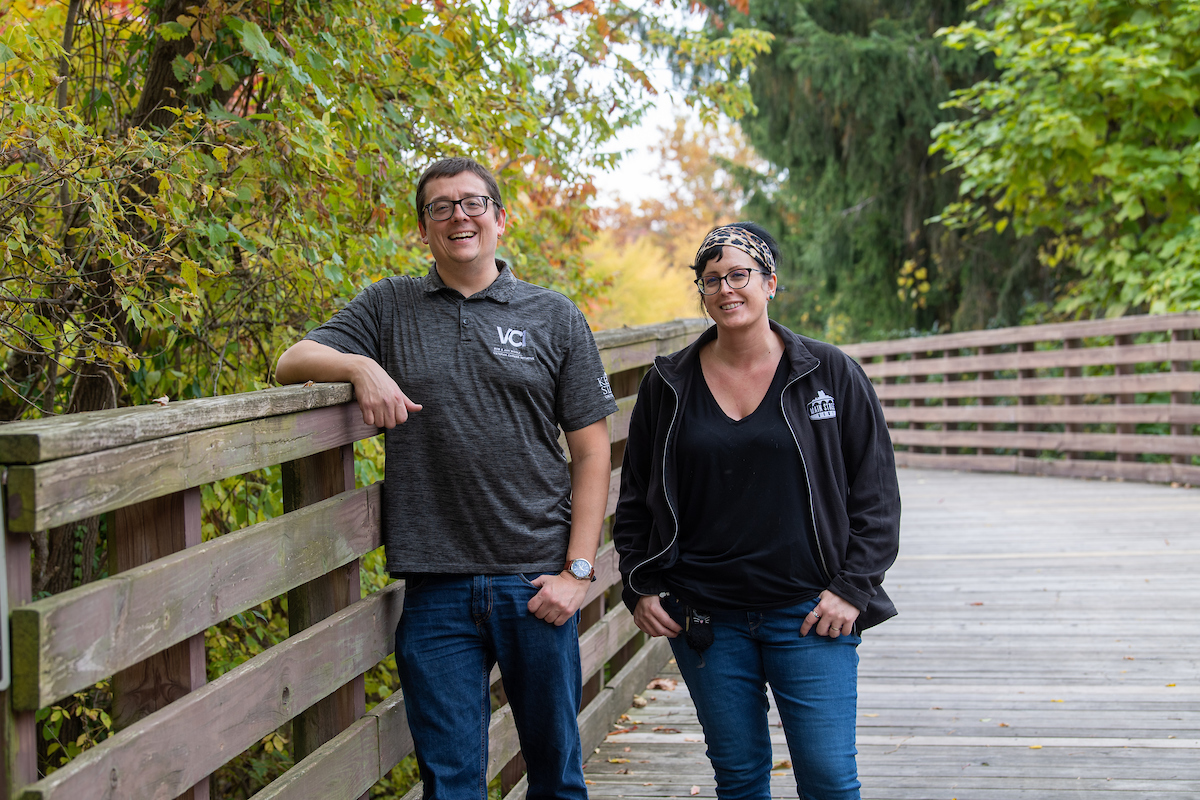 “Yeah, we were excited when we learned that it was dredging work,” Rider said, noting their support for the environmental cleanup.

Likewise, Barb Metzger, of Bath Township, who received her master’s degree in speech therapy from Kent State in 1986, also had been curious about the equipment on the river.

“We had just been looking at the water and wondering about it, so it’s good to learn what is going on,” she said. 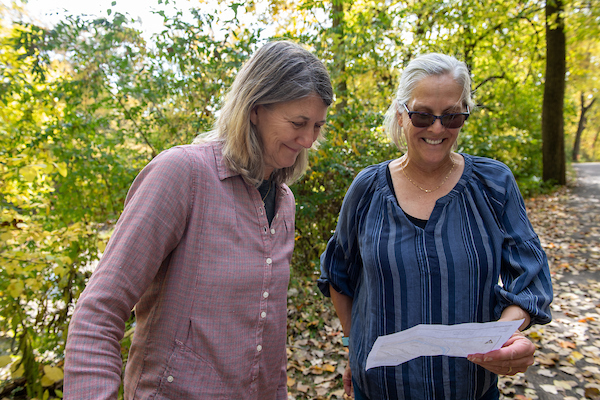 The three said they enjoy the section of trail that goes along the river in the area from Kent to Tallmadge.

Susel said the river remediation activity is part of “some legacy environmental conditions.”

Years ago, the property was sold as part of a larger portfolio of properties to the international concern ABB, which has since submitted a voluntary action plan memorandum of understanding with the Ohio Environmental Protection Agency for cleanup.

“This is a long, ongoing cleanup process,” Susel said. “One of the activities, in addition to cleaning up with the site, is addressing any migration off-site.” 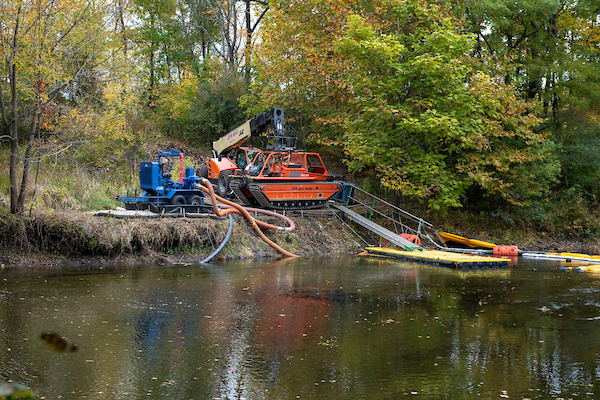 In this case, the migration was petroleum, and while not a significant amount, it was creating hazardous conditions on the water. In the past, industry on the site had discharged stormwater into the river that contained petroleum pollution. The petroleum is in sediment that has settled on the river bottom, but when disturbed occasionally rises to the top and produces the oily sheen on the water.

For much of the 1900s, the property was home to Lamson & Sessions, which manufactured nuts and bolts, and later became home to RB&W Corp. (See University Libraries Special Collections and Archives for Lamson & Sessions company records.)

Before the work began, a species of mussels was relocated from the area, Susel noted. Care also was taken not to disturb a species of bats that nest in the trees along the riverbank. 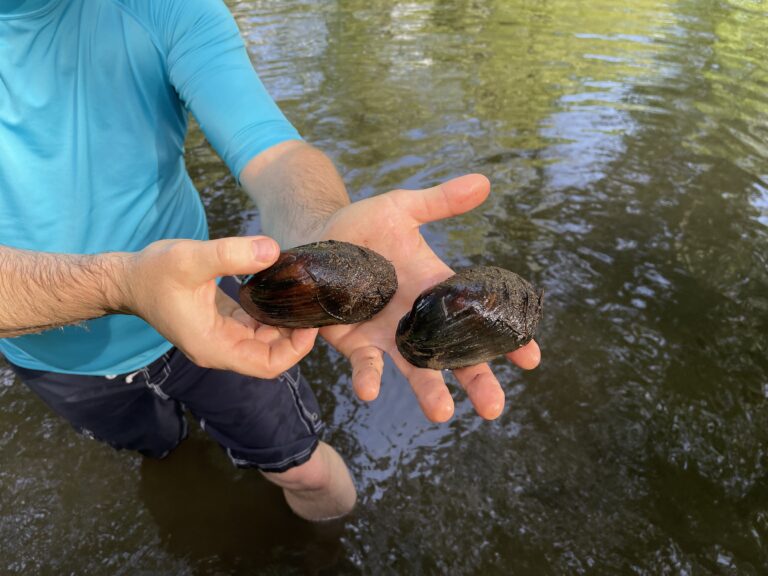 The dredging work is being performed by J.F. Brennan Co., a Wisconsin-based firm that specializes in environmental dredging, in conjunction with HZW Environmental Consulting of Mentor and Akron.

Susel said dive teams are working from floating platforms stationed at various points along the river. Workers vacuum up the sediment, then any water that is removed in the vacuuming process is cycled through a water purifier before being pumped back into the river.

The dredging work has not disrupted use of the river for kayaking or other activities, Susel said.