In its 28th year, the Bob James Memorial Scholarship Award recognizes one female and one male student who have achieved a minimum grade point average of 3.50 and have displayed good character, leadership and citizenship. The students are nominated during the year in which they complete their final season of eligibility. The scholarship is awarded in honor of Bob James, the second commissioner in Mid-American Conference history (1964-71). 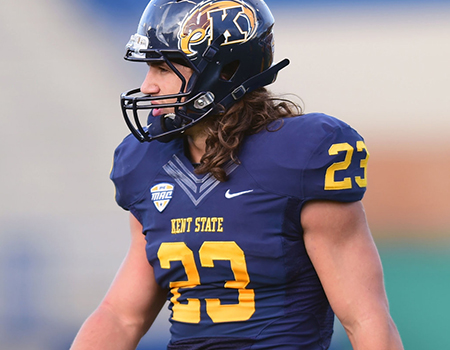 Having finished his playing eligibility in 2015, Italiano is completing his final year of undergraduate classes and will receive his degree in May 2017. The biochemistry/pre-med major currently carries a 3.983 cumulative grade point average. In every semester at Kent State, he has made either the President's List or the Dean's List. In August 2015, Italiano was named Smartest Player in College Football by NFL.com.

A native of Canfield, Ohio, Italiano is a four-year letter winner, a three-year starter and was twice named team captain in 2014 and 2015. During his collegiate career, he collected 257 career tackles, along with five interceptions and five forced fumbles. Italiano was named to the 2015 Wuerffel Trophy Award Watch List and was a nominee for the 2015 All-State AFCA Good Works Team. He also became the first Campbell Trophy finalist in program history.

"It's a testament to Jordan's hard work and dedication with everything he does," says Kent State head football coach Paul Haynes. "He's a great ambassador not only to this football program, but also to Kent State University."

Outside the classroom and the gridiron, Italiano often gave of his time to charitable events on campus and within the community. He helped organize donated food and prepared meals for the less fortunate in the Kent area, volunteered with the Lawrence County Social Services youth sports and with the St. Elizabeth Health Center to work with families and patients for comfortable care, read books to elementary school students in Akron and Cleveland and helped promote physical education at local elementary schools.