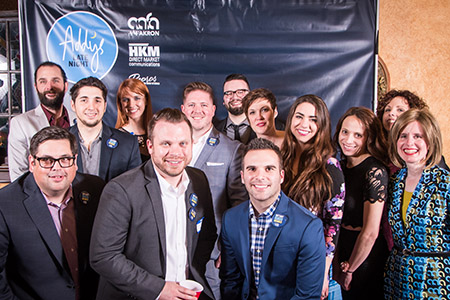 The ceremony, which was themed “ADDY’s Late Night,” took place on Friday, Feb. 24, at the Akron Civic Theatre. The event included a reception, award show and after-party with live music.

“The ADDY Awards are different than any other awards I’ve won," Williams says. "They’re a big deal to me. I’m so incredibly proud to be acknowledged for my hard work.”

Harms, whose design was submitted by Kent State’s student-run design agency IdeaBase, says that she is incredibly proud to see her logo design win such a prestigious award.

“It took me over a month to design the logo and get everything together,” Harms says. “It’s really cool to see all that hard work pay off in such a huge way.”

Jason Zehner, senior graphic designer with University Communications and Marketing, says that the office owes its success to choosing pieces that have the right amount of creative originality, professional attention to detail and effective messaging toward the targeted audience.

“Good work should be noticeable, distinctive and evocative,” Zehner says. “We always work very hard on all of our projects, and we love when we can do it really well. And if our work gets this kind of respect, that’s all the better.”

Competitors who win gold awards in the local competition are automatically forwarded to the District Five competition of the American Advertising Awards, and silver award winners can forward their work for an additional fee.

Gold winners from the district awards are then forwarded to the national competition. The national winner’s ceremony, known as Admerica, will take place this year in New Orleans from June 7-10.

The following is a complete list of Kent State's 2017 ADDY Award winners: