Kent State University Associate Professor Donald Gerbig believes that teaching should focus on the students’ success. While this philosophy is not unique among educators, it is the difference in how Gerbig puts that belief to practice that has earned him Kent State’s Distinguished Teaching Award. 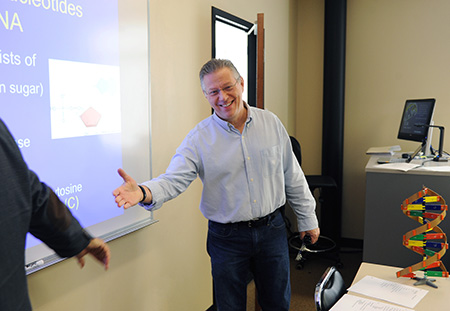 Gerbig has been nominated by students for the Distinguished Teaching Award four separate times in his 14 years teaching at Kent State University at Tuscarawas. This year, Gerbig is finally a recipient of the award.

“I feel honored that I’ve been chosen for this,” Gerbig says. “I work with a lot of great people, and I have a lot of great support down here at Kent State Tuscarawas.”

The award is sponsored by the Kent State University Alumni Association and is presented annually to tenured and tenure-track professors who demonstrate extraordinary teaching in the classroom and a devotion to touching the lives of students.

Kent State Tuscarawas Dean Bradley Bielski says Gerbig’s dedication to students has consistently made him stand out in the Kent State community.

“While we could demonstrate his effectiveness through consistently high numerical scores on his end of course surveys, what differentiates Don from many of his high-scoring colleagues is the level of commitment he has to students outside of the classroom confines,” Bielski says.

Aside from working with students in his own biology classes, Gerbig also works with College Credit Plus high school students and graduate students, outside of his regular responsibilities.

“I’m focused on the students’ success,” Gerbig says. “You kind of learn, if you’re really dedicated to teaching, that it is about the students. It’s really not about you.”

Kelsey Hardy, a business degree graduate and current veterinary technology major, nominated Gerbig for the award this year. Hardy points out that Gerbig’s teaching style pushes students to do their best.

Gerbig says that his motivation comes from seeing students succeed in their respective fields.

“When I see them working in their fields, there’s a lot of satisfaction in knowing that I helped with that,” Gerbig says. “A lot of them will point back and say, ‘Hey, I really enjoyed your class and it really made a difference.’ I think that, in the back of my mind, is my motivation – to help students achieve what they want to achieve.”

Gerbig’s efforts have consistently been praised by everyone he works with. Kent State alumnus Jeremy Rentsch worked with Gerbig in a work-study position at the microbiology lab.

Rentsch says that Gerbig acted as a helpful sounding board during his research colloquium at Kent State. Rentsch is now an assistant professor of biology at Francis Marion University.

“Dr. G remains a supportive friend and coach to this day,” Rentsch says. “As a first-generation college student, I'm deeply indebted to the mentoring I received as an undergraduate. Without supportive faculty in my life, I would have found achieving an undergraduate education a nearly insurmountable task. I try my best to carry that debt forward by being a mentor for my students.”

“A couple years ago, he wrote a letter back to the campus and pointed back to working on a research project with me as being a very pivotal point in his life and it blew me away,” Gerbig says.