The Kent State University Museum announces the appointment of Sarah J. Rogers as its new director. Ms. Rogers has been active in the arts and nonprofit arena for more than 25 years in a variety of roles, which include curating, museum management, fundraising, communications and marketing, donor relations and community engagement. 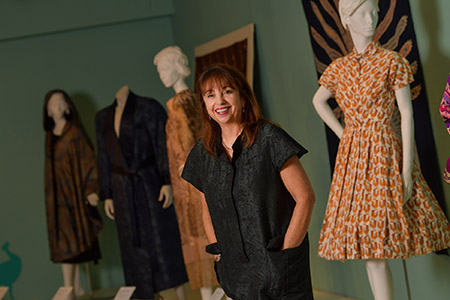 Prior to the Columbus Museum of Art, she was the vice president of advancement and communications at the Columbus Association for the Performing Arts and director of exhibitions at the Center of Science and Industry (COSI), both in Columbus, Ohio. During the ’90s, she worked at the Wexner Center as the director of exhibitions where she helped to inaugurate the new contemporary arts center designed by Peter Eisenman through 25 curated exhibitions, including installations of such accomplished artists as Maya Lin, Ann Hamilton and Barbara Kruger.

“Ms. Rogers brings a wealth of experience to the role, and we are confident in her ability to lead us into the next era for the museum,” says John R. Crawford-Spinelli, dean of Kent State’s College of the Arts, who oversees the administering of the museum.

Ms. Rogers has a bachelor’s degree in French from Wells College in New York and a master’s in art history from Northwestern University in Illinois.

“Today, the role of universities and museums has never been more necessary to cultivate the creativity, critical thinking, innovation and empathy that is necessary to build a responsive world,” Ms. Rogers says. “Kent State’s commitment to fostering engaged citizens is the perfect environment for Kent State University Museum to blossom into an open and relevant hub for learning and conversations across the entire community. I am honored to join the Kent State community in this role and look forward to welcoming everyone to participate in your museum.”

Ms. Rogers succeeds Jean Druesedow, who retired after serving as the museum’s director for the past 25 years.

Opened to the public in October 1985, the Kent State University Museum was founded with an initial contribution from New York dress manufacturers Jerry Silverman and Shannon Rodgers. The museum holds one of the most comprehensive collections of historic and contemporary fashions, as well as costumes representing many of the world’s cultures. An extensive collection of American glass, fine furniture, textiles, paintings and other decorative arts combine to give context to the study of design.