Live Chat
The Kent State University women’s rugby team took matters into their own hands when they encountered a tree blocking the road on their way to a match. (Photo credit: Tina Miller)

The Kent State University women’s rugby team found themselves facing a literal bump in the road on their way to a rugby match on Oct. 7. 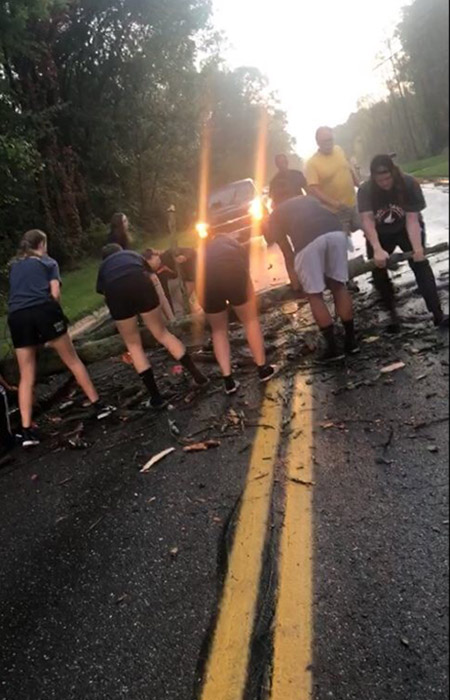 The drive to the match stopped short when the players came upon a large tree that had fallen into the middle of Summit Road.

Clyde Gesaman of Ravenna Township stood outside, directing cars around the fallen tree in an attempt to prevent an accident.

“I was flagging down cars trying to stop them before they would hit the tree,” Mr. Gesman writes in an email. “Then, a car stopped and two girls got out. They said they were part of a group of cars going to a women’s rugby match.”

While listening to Mr. Gesaman’s directions on how to carefully avoid the tree, the women quickly came to the conclusion that removing the tree all together would be the best solution to the problem.

“We were trying to figure out the best way to turn eight cars around,” says Ashley Hamrick, president of the women’s rugby team. “That’s when one of the players happened to jokingly comment, ‘Why don't we just move it?’"

And so they did.

All 22 members of the women’s rugby team spilled out of their cars and dashed to help. The women rushed to remove debris and break off large branches from the tree. Within minutes, the road was clear except for the main part of the fallen tree. Together, the rugby team and a few bystanders were able to get the tree out of the road to allow cars to safely pass by.

“These girls could have very easily just turned around and went to their match,” Mr. Gesaman writes. “But they chose, without anyone asking, to stop and help and possibly avoid an accident where someone could have been hurt. These girls showed what is good and helpful about people of character.”

To learn more about the women’s rugby team, visit www.kent.edu/ksu-womens-rugby.