Supporters give more than $1 million

Kent State University’s Giving Tuesday 2017 doubled the 2016 campaign – hitting more than $1 million just before midnight on Tuesday, Nov. 28. The single largest gift of the day was a $100,000 donation to the Fashion School Study Away Fund. From multiple student education abroad scholarships to research opportunities and poetry programs, there were more than 40 featured giving options across the Kent State system from which to choose. 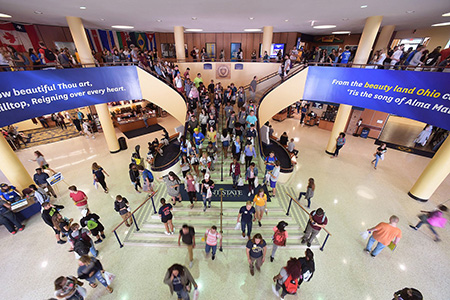 “We are beyond thrilled that Giving Tuesday 2017 was an exceptional success with funds throughout our eight-campus university network receiving support,” says Stephen Sokany, vice president for institutional advancement at Kent State. “This would not have been possible without the generosity of the thousands of individuals who participated in our celebration of philanthropy. We are humbled and deeply grateful that our Kent State supporters helped us raise more than $1 million to further the university’s mission to provide the most impactful educational experience for all of our students.”

While Giving Tuesday is officially recognized as the Tuesday following Thanksgiving, Kent State put a new spin on this international day of philanthropy by kicking off the season of giving on Nov. 1. In addition to being able to make individual donations, students, faculty, staff and supporters created 151 individual peer-to-peer fundraising pages for the cause of their choice.

Various matching incentives were provided by individual donors as well as $150,000 from the Kent State University Foundation, which was used for participation boosts leading up to Nov. 28, and then for one-to-one matching on Giving Tuesday proper. These incentives encouraged supporters to give at a time when their gifts would have the most impact on students, scholarships and programs.

“Our supporters amazed us with their tremendous generosity this Giving Tuesday,” says Danielle Hupp, senior associate director of special giving initiatives at Kent State. “The expanded campaign, coupled with the crowdfunding opportunities, enabled supporters to get more involved than ever and to truly give to the area that meant the most to them. The whole Kent State community got behind us to prove that Golden Flashes give back.”

For a complete list of all the funds that were featured in the Giving Tuesday campaign, please visit www.kent.edu/givingtuesday.