KSUMobile, Kent State University’s mobile application for faculty, staff and students, has been updated to include access to Gmail accounts, a GPA calculator and a redesigned homepage.

The KSUMobile app was first developed in 2009, and has undergone numerous changes since its initial launch.

“When we first started off, we bought an off-the-shelf product,” says Sameer Jaleel, director of Platform and Integration Solutions at Kent State. “There was this app that was made specifically for higher education, so a bunch of universities used it. We gave them a lot of information, and they set it up. Users could not see their own information, though. They were only able to look up generic information, such as directories.” 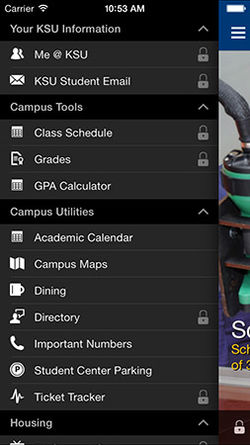 Kent State’s team took over development of the app in 2010 when they decided to build it themselves. Since then, the app has gone through several versions and updates. The team tries to release updates every four months to have at least three updates per year, says Jason Dunfee, senior applications developer at Kent State.

The new updates work with the app’s current features to help faculty, staff and students. The Gmail integration allows users to access their email directly through KSUMobile without downloading a Gmail app on their phone, the GPA calculator will let students estimate their grade point average based on their current grades and the new home screen gives users access to the www.kent.edu homepage stories.

“When you launched the app, you got a picture on the home screen, but that home screen itself remained stagnant,” Jaleel says. “There wasn’t much you could do there. We have now replaced that image with a success story from the kent.edu homepage. It’s a little more action-oriented, as opposed to being a stagnant image. You can scroll through it, and if you click into it, you can read the story.”

Another update to KSUMobile is the ability for it to gather information about system crashes to help its users.

“We know if, for example, a person using an iPhone 5 that has iOS 8 software experienced a crash, this is what they were trying to do at the time,” Jaleel says. “We can try to figure out what happened to make sure it doesn’t happen again.”

The updates are in response to user demands based upon feedback via the app.

“We receive feedback directly through the app,” Jaleel says. “There is a way to email us on there, so a lot of the features we have put in were based on direct feedback. For example, requests for access to Gmail through the app kept coming, so we obliged and included it with this update.”

“The app is in constant development,” Dunfee says. “It’s never done, so we’re always looking for feedback or enhancements that would help the students out. We always take that kind of information and suggestions and look those over.”

The KSUMobile app is available for free download for both iOS and Android platforms.