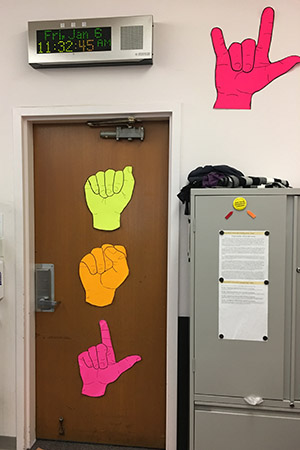 Kent State Police Officer Jeff Futo says the sign is intended to help improve the university’s mass notification system (MNS), a phone-based system that sends voice messages through university phones, fire and public-address speaker systems to alert students, faculty and staff on campus in the event of an emergency.

“We wanted students who weren’t able to hear the MNS notifications to be alerted in an emergency,” Futo says.

Futo says the project started after Abigail Freitag '16, an educational studies and sign language student, decided to pursue the idea as her experiential learning credit.

“I picked it up starting in fall 2016,” Freitag says. “I was interested in seeing how officers treat deaf people.”

Freitag says this project resonated with her because of an experience during an emergency situation a few years back.

“There was actually a deaf teacher teaching at the time, and he left the room to figure out what was going on instead of taking cover,” Freitag says. “That scenario really inspired me to put something in place.”

Freitag says she spent roughly 20 hours each week working on this project, learning how the MNS system worked and emailing potential donors to secure funding.

Freitag says Thomas Euclide, associate vice president for facilities planning and operations, met with her and immediately became invested in the project.

“It seemed like a great opportunity to test a system that isn’t out there to provide that type of service to students that are deaf,” Euclide says.

Euclide says accessibility is something he has pushed on campus since he arrived, and he was impressed with how well prepared Freitag was with this project.

“What I liked was that she had done all the research,” Euclide says. “She knew exactly what needed to be done. She had the cost and everything at hand, so there was little left to chance.”

Because of this preparation, Euclide was able to use $3,500 from the university’s accessibility and improvements fund to help Freitag’s idea become a reality.

Freitag says one of her teachers, Jacqueline Gee, a former campus accessibility liaison, started the project vision for the scrolling sign with Futo, then Abigail picked up where they left off.

“One thing made very clear to me was that while we strive to make physical accommodations, such as ramps and door openers, we haven’t scratched the surface for making equality happen for deaf individuals on campus,” Gee says.

Gee says since the Educational Studies project requirements are to benefit the campus community as a whole, it also provides equal access for English as a Second Language Learners as well as international students.

Freitag says she is proud to see the sign installed and hopes it will make a big difference in the deaf community at Kent State.

According to Futo, the next steps of the process are evaluating how useful the sign is and seeing if it can be used in other areas.