Complete immersion in Zimbabwean culture, conservation and photography — and lions, of course. These were all part of the experience Kent State University senior photojournalism student Aaron Self found in Zimbabwe during his summer internship supported through the 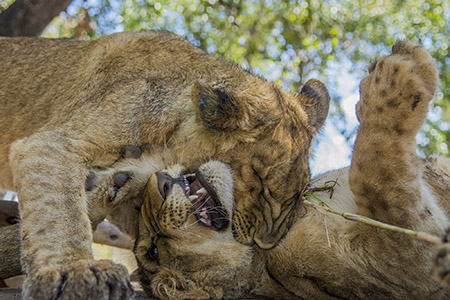 “My time was spent all through Zimbabwe in Victoria Falls, Gweru and Antelope Park,” Self says. “Now I have an African portfolio while most of my classmates were getting politics over the last year.”

Self interned with ALERT, a private African company that works with communities, policy makers, nongovernmental organizations and business leaders on lion conservation projects. Self’s mother discovered the photography and videography internship opportunity. After some research, Self learned that the internship was a legitimate way to spend his summer.

“In Zimbabwe, I was there only taking pictures, editing pictures and finding new ways to improve myself as a photographer,” Self says.

During his time in Zimbabwe, a country with a booming tourism industry and numerous conservation trips and national parks, Self was able to work closely with lion cubs and their handlers.

“In the two months I was with the cubs, they grew to be almost twice their size, which was amazing in its own right,” Self says. “The handlers don’t have any special training for obedience to keep the cubs in line. In fact, they mostly used confidence and gentle encouragement.”

Self says he was amazed to see how fast the cubs grew. Also, he says, it was fascinating to watch the handlers keep tabs on the wild cubs.

“Because we stand well above the cubs, they see us as dominant members in their pride,” Self says. “Of course, the cubs are more inclined to listen to the handlers who have worked with them since they were very little. Even the full-grown lions that knew the handlers when they were little cubs, but are now 300 to 500 pound giants, recognize them as the more dominant members of the pride.”

Self says the experience changed his outlook on the world and on life. Unable to speak Ndebele, one of the main languages spoken in Zimbabwe, he had to rely on the help of interpreters.

The education Self received during his internship was richer as the result of the experiences he had and the friendships he made, he says. He now has friends from the United Kingdom, Holland, Netherlands, Denmark, Italy, Luxemburg, Spain, Australia, Zimbabwe, Zambia and throughout the United States.

“You get close to people really fast,” Self says. “By week eight, I tried not to bond with anyone new because I didn’t want to deal with the heartbreak of leaving.”

Self says he thinks it is good to experience different cultures in order to enrich education outside of the classroom. This internship counted as a credit, and the College of Communication and Information helped him fund the opportunity through the Hagedorn Photojournalism Scholarship, which was established with a legacy gift of $4.2 million in 2014 and is Kent State’s largest scholarship fund.

During his internship, Self was able to focus his time on photographing lions, research conservation projects and communities. His photography and videos helped impact tourists. Guests from around the world came to Victoria Falls, Zimbabwe, known as one of the seven natural wonders of the world, to walk with the lions, paying money to raise funds for lion care, conservation and volunteers.

David LaBelle, former photo director for the photojournalism program and now adjunct photography professor at Kent State, says that Self has invested in experiences that will prepare him for his photography career.

“One of the great pleasures of working with Aaron from the time he started in the photojournalism program until now is watching his growth and maturity as a photographer and leader,” LaBelle says. “Unlike so many students, Aaron knows where he wants his photography to lead him – to nature, the outdoors, animals and travel.”

LaBelle sees that Self’s growth and focus will lead him to a successful nature and outdoor photography career.

“Self is constantly doing those things that bring joy to his soul in those environments he loves most,” LaBelle says.

For more information about Kent State's photojournalism program and other opportunities like Self’s, visit www.kent.edu/jmc.