Kent State University has announced the hiring of Sean Lewis as its 22nd head football coach.

Coach Lewis brings an extensive coaching résumé to Kent State and has been one of the fastest-rising coaches in the nation over the last decade. He comes to the Kent State Golden Flashes after serving as the co-offensive coordinator and quarterbacks coach under Dino Babers at Syracuse University. His background stretches from his four-year playing career at the University of Wisconsin under Barry Alvarez to winning the 2015 Mid-American Conference (MAC) Championship as the co-offensive coordinator at Bowling Green State University. 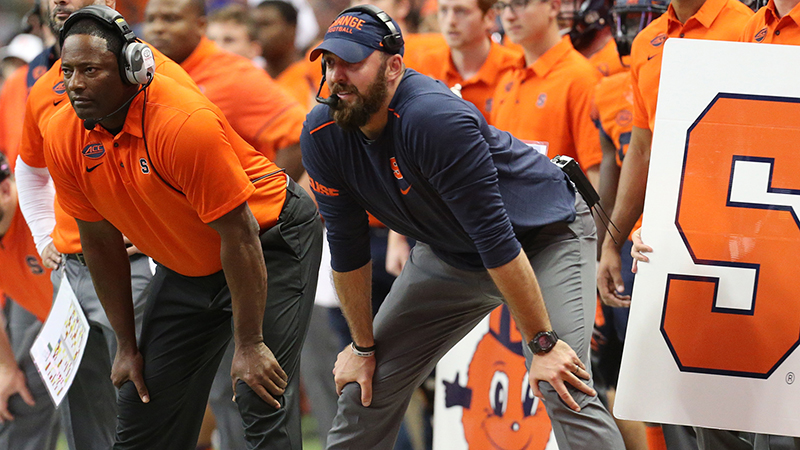 That ascension has led Coach Lewis to become the youngest Football Bowl Subdivision (FBS) head coach in the nation at the age of 31. That distinction was previously held by the University of Oklahoma’s Lincoln Riley at age 34.

“We are thrilled to bring Sean to Kent State,” says Director of Athletics Joel Nielsen. “Sean brings an innovative style of football to Kent State with an offensive system that is proven in the MAC.  We are confident Sean can build broad support and engagement in our program along with competitive success.”

This past season, Syracuse put up 40 or more points in three games and knocked off defending national champion Clemson University 27-24 on Oct. 13. Syracuse’s offense averaged 456.3 yards and 24.4 first downs per game.

Those numbers were fueled by a fast-paced offense that led the nation in offensive snaps per game (87.8). Wide receiver Steve Ishmael broke the single-season program records for catches (105) and yards (1,347), earned second-team All-America honors and was a semifinalist for the Biletnikoff Award.

During Coach Lewis’ first season with the Syracuse Orange in 2016, its offense set numerous program records including most passing yards in a season (3,855). Its 5,290 yards of total offense were the second most in program history.

In 2015, Bowling Green ranked fourth in the nation in total offense (546.8) and sixth in scoring offense (42.2 ypg). Coach Lewis served as co-offensive coordinator and quarterbacks coach for Matt Johnson, that season’s MAC Offensive Player of the Year. Johnson finished second in the nation in both passing yards (4,946) and touchdowns (46). All-American wide receiver Roger Lewis finished second in the nation in receiving yards (1,544) and third in touchdown catches (16). One year earlier, the Bowling Green Falcons won a MAC East title and the Camellia Bowl.

Coach Lewis coached tight ends and inside receivers at Eastern Illinois. The Eastern Illinois Panthers made the Football Championship Subdivision (FCS) playoffs both seasons and reached the quarterfinals in 2013 with a 12-2 mark. Eastern Illinois’ offense was led by San Francisco 49ers’ quarterback Jimmy Garoppolo.

Coach Lewis’ coaching career began as the offensive coordinator for his alma mater Richards High School in Illinois. Richards was led by veteran Gary Korhonen, who earned National High School Coach of the Year honors from both the National Football Hall of Fame and the National High School Coaches Association.  Coach Lewis transitioned to the college level in 2010 as tight ends coach at Division II University of Nebraska Omaha. He made his first MAC stop in 2011 as a graduate assistant for the University of Akron.

Coach Lewis earned a bachelor’s degree from Wisconsin in agricultural sciences in 2007. He and his wife, Sarah, have a son, Rory.