Kent State Director of Athletics Joel Nielsen has announced the hiring of Todd Starkey as the Golden Flashes' head women's basketball coach. Starkey takes over as the sixth head coach in the history of Kent State's women's basketball after spending the last two seasons as an assistant at Indiana University.

"It's truly an exciting time for our women's basketball program as we welcome Todd Starkey to the Golden Flashes’ family as the next women's basketball head coach," Nielsen says. "His head coaching experience and recruiting ability make him the ideal fit for our institution. Todd's commitment to academic excellence is well-noted throughout his career, and he understands the program’s role within the university and community. We are excited to bring his competitive spirit and experience to Kent State University." 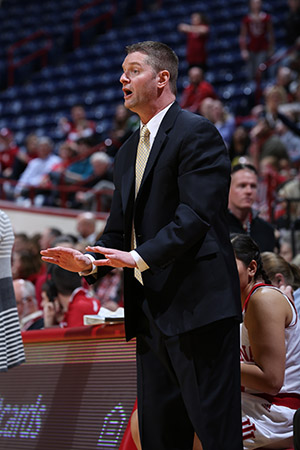 A 19-year coaching veteran, Starkey helped lead the Hoosiers to a historic year in 2015-16 as the team made its fifth NCAA Tournament appearance and grabbed its first win in the NCAA Tournament since 1983. Leading up to that, Starkey helped guide the team to a 21-12 season, tying the school record in wins, including a 14-0 record at home last season.

"I am very excited to join the Kent State community and to have the chance to build on a program that has such a great history," Starkey says. "I want to thank President Beverly Warren, Director of Athletics Joel Nielsen and Deputy Athletic Director Casey Cegles for giving me this great opportunity."

Academics are important to Starkey as Indiana compiled a cumulative grade point average above 3.20 his first year on staff, and five students were presented with Academic All-Big Ten Honors last month.

While at Indiana, Starkey was responsible for assisting with the program's recruiting, practice and game preparation, scouting reports, scheduling, player development and technology applications.

Winning is nothing new for Starkey, as he posted a 165-95 record in nine years as the head coach at Lenior-Rhyne University in Hickory, North Carolina, becoming the winningest coach in program history. He averaged 20 wins per season in his final six years and led the program to three conference regular season championships. Starkey received three-straight South Atlantic Conference Coach of the Year honors, marking the most consecutive awards in conference history in either men's or women's basketball.

Starkey led Lenior-Rhyne to one of its greatest seasons in history as the team went 27-5 and won both the conference regular season and tournament titles in 2008-2009. He was named the 2009 Russell Athletic/WBCA NCAA Division II Coach of the Year and SAC Coach of the Year for his efforts.

In his time at Lenoir-Rhyne, Starkey had a 100 percent graduation rate of players who remained past their sophomore year, while the team maintained a grade point average of 3.0 or higher every year. During the storied 2008-2009 season, Lenoir-Rhyne drew a larger average home attendance than 211 NCAA Division I programs.

Prior to his head coaching stint, Starkey served as an assistant coach for Lenoir-Rhyne's men's team for two seasons (2002-04). The team won the 2004 SAC regular season championship and made an NCAA postseason appearance.

Starkey got his coaching career started at his alma mater, Montreat College in North Carolina. He was an assistant men's basketball coach for five seasons (1998-03), helping the team to an NAIA National Tournament appearance in 2000.

Starkey grew up in nearby Youngstown, Ohio, and graduated with a bachelor's degree in outdoor education from Montreat College. His playing career began in basketball and tennis at Mars Hill College.

Governor Names Robin Kilbride to Kent State Board of Trustees
Ohio Gov. John Kasich has appointed a new trustee to the Kent State University Board of Trustees. Kasich named Robin Kilbride of Wadsworth, Ohio, to...
Kent State Announces Finalists for Vice President for Student Affairs
Dear Kent State Community Members: Our national search for the vice president for student affairs position, which began in December, is progressing...
Candidates Announced for Vice President for Kent State System Integration
Dear Colleagues:  I am pleased to announce that three candidates for vice president for Kent State System Integration will be on campus over the...
e-Inside
Street Address
University Communications & Marketing