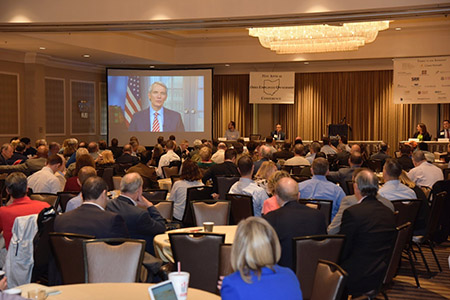 15 states to the Akron/Fairlawn Hilton on April 28. Ohio Senators Robert Portman and Sherrod Brown welcomed them to the conference via recorded video, with representatives from both senators adding their own comments in support of employee ownership in Ohio and across the U.S.

Following the welcome from the senators, participants were treated to a morning keynote speech from Cindy Turcot, COO of Gardener Supply Company, an employee-owned company in Burlington, Vermont, and current chair of the national ESOP Association, an employee-ownership advocacy group based in Washington, D.C.

Turcot’s keynote address stressed the benefits of employee ownership on the business, its employees and their communities. Turcot also noted the opportunity that the impending wave of baby boomer business-owner retirements had for the creation of additional employee-owned businesses, most of which are created via a succession event within the ownership of the business.

In addition to the keynote session, two employee-owned enterprises received awards for their activities and engaging their employees within the business operations. The Ruhlin Company of Sharon Center, Ohio, received the John Logue Employee Ownership Excellence Award, named for OEOC founder and Kent State political science professor John Logue); and Robin Industries of Independence, Ohio, received the ESOP Impact Award. In addition to the individual awards, 20 companies celebrated milestone anniversaries of being employee owned in 2017, with the Ruhlin Company hitting 40 years under its Employee Stock Ownership Plan.

More than 150 employee owners – both managerial and non-managerial – from 53 employee-owned companies, representing both Employee Stock Ownership Plans, or ESOPs, as well as worker-owned cooperatives from Ohio and neighboring states, took part in the conference activities. In addition, the conference hosted a broad base of attendees from a number of companies exploring a sale to the employees, multiple nonprofit support organizations, economic development and labor groups, academics and private-sector consultants to the industry.