Kent State University’s unique programs and majors have attracted students from all over the world, including a few from the largest state in the nation. 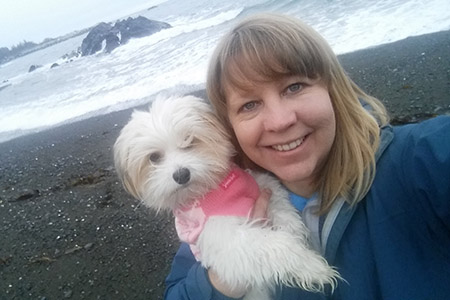 Currently, six students from Alaska – two undergraduate and four graduate – are taking classes from Kent State. Freshman aeronautics major Savannah Ramsey is more than 3,000 miles from her home in Juneau, Alaska. She says it took her four flights and nearly 12 hours to come to Kent State.

Ramsey says she came to Kent State after looking at universities with air traffic control programs, including schools from Washington, North Dakota and Missouri.

“I knew I wanted to do air traffic control, and there are only so many schools that have a collegiate training program,” Ramsey says, “and Kent State has one of the best ones.”

Ramsey says she had to adjust to living in Kent, including getting used to changes in weather and in the drinking water. She says she has enjoyed meeting new people and becoming familiar with Northeast Ohio.

“There are just so many more things to do and places to go,” Ramsey. “When I talk to people on campus, some are from Ravenna or only live 15 minutes away. It’s nice being able to drive anywhere or go anywhere.”

Having the ability to drive around and visit different cities has been a big change for Ramsey because there are no roads connecting her hometown to the rest of Alaska. Because one must fly or boat in or out of it, it is considered a “de facto” island city.

The rest of Ramsey’s family still lives in Alaska. Eventually, Ramsey says, she hopes to study at the Federal Aviation Administration and return to Alaska to become an air traffic controller.

Junior fashion merchandising major Cepeda Woods, originally from Anchorage, Alaska, says her main reason for coming to Kent State was the School of Fashion Design and Merchandising, which is ranked as one of the top five programs in the country.

“The transition was hard at first, and I missed my friends and family back in Alaska,” Woods says. “After my first semester, I met a lot of great people and started getting involved. Now, I feel like I can claim Kent, Ohio, as my home.”

Woods says that people are often surprised to hear she is from Alaska and typically have misconceptions about what life is like there.

“People are always surprised to find out that I actually lived in a city in Alaska,” Woods says. “They always ask me weird questions like if I have Twitter in Alaska or if it’s always dark there. Ohio is different from Alaska; it’s not that different.”

Kerry Halvarson, a graduate student studying library and information science (M.L.I.S.) with the school licensure online, says she found out about Kent State when looking at the American Library Association’s recommended schools. Halvarson, who is in Fairbanks, Alaska, is currently the acting librarian for the school at which she has taught for 28 years.

“I chose Kent State over other programs because it was 100 percent online,” Halvarson says. “I was not interested in leaving Alaska, especially in our short but beautiful summers. I also was looking for a comprehensive and rigorous program for school libraries in particular.”

Halvarson says the biggest challenge she has faced with the program so far is the four-hour time difference.

“Instructors have been understanding the few times this issue has arisen, but I do have to plan to get things done early to avoid late work due to technological issues,” Halvarson says.

“The tech services are really responsive to questions and troubleshooting, but I plan ahead,” Halvarson says. “I enjoy the rigorous classes, but I certainly couldn’t have done this program with kids still at home. I like that the other students are from various places and bring different perspectives. I feel like I definitely have gotten my money’s worth.”

After completing the program, Halvarson says she hopes to continue working in the school where she works now because she already has made positive changes for the staff and students.

Laura Haskins, who lives in Seldovia, Alaska, is also a graduate student studying for an M.L.I.S. degree, but with a K-12 concentration.

Like Halvarson, Haskins says she found out about Kent State after searching online for an M.L.I.S. program because there is not one offered in Alaska.

“I was excited to find a 100 percent online program, and Kent State doesn’t charge out-of-state tuition for its online classes, which was a huge savings over the other programs I was looking at,” Haskins says.

Haskins says she also has enjoyed learning from her professors.

“I have really enjoyed the professors,” Haskins says. “They are very involved with the trends and research involved with librarianship, both nationally and internationally. I appreciate their experience.”

In the future, Haskins says she plans to stay in Alaska and pursue a school librarianship or a position at a public library as a children’s librarian.