The Allerton Apartment Complex went through its final phase of demolishment at the end of August. The process of closing the apartment complex has been going on since 2005. Buildings A, B, C and D were the final buildings to be razed.

The Allerton Apartment Complex was built in two phases in 1962 and 1966. The apartments primarily housed Kent State international students with families and upper-division students. 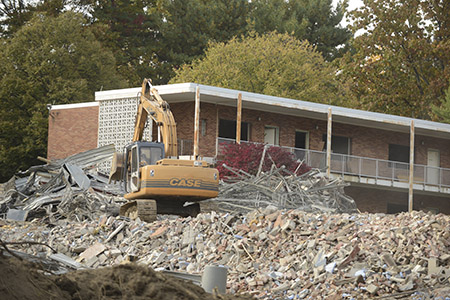 Jill Church, Kent State’s executive director of Residence Services, says the demolition was split up into phases to benefit students.

“We wanted to do it in phases so students could continue to live there,” Church says.

Church says the university made the decision to close the apartments because of their age.

“The cost to make renovations to the apartments exceeded the value of the buildings,” Church says.

The university allowed local service agencies, such as Habitat for Humanity, to go through the buildings before they were closed and take appliances such as stoves and refrigerators. Additionally, the Kent Fire Department used the buildings for fire safety training.

“This was a very unique opportunity where we had a commercial-like structure that is made of brick and block to practice training on,” Coffee says.

Coffee says it took the department a week to prepare the buildings before setting them on fire. Afterwards, they worked with the demolition team on the roof of a building to practice ventilation cuts, a practice used in fire rescue. The department practiced training on the apartment buildings up to the day before final demolishment.

Future plans for the land where the Allerton Apartments were located have not yet been determined.