WKSU has received 12 Ohio SPJ Awards for 2015 from Ohio chapters of the Society of Professional Journalists (SPJ). The competition recognized station staff for work created in 2014. The station earned more honors than any other radio station in Ohio, and reporter/producer Tim Rudell was named Best Reporter in Ohio, the second consecutive year the award went to a member of the WKSU news staff. Awards were presented during a ceremony in Cincinnati on board the Belle of Cincinnati.

Since the addition of broadcast categories in 1998, WKSU has been recognized with more Ohio SPJ awards than any other radio news outlet. WKSU competes in the Ohio SPJ contest with radio stations and journalists from media markets throughout Ohio and stations broadcasting to Ohio from surrounding states. 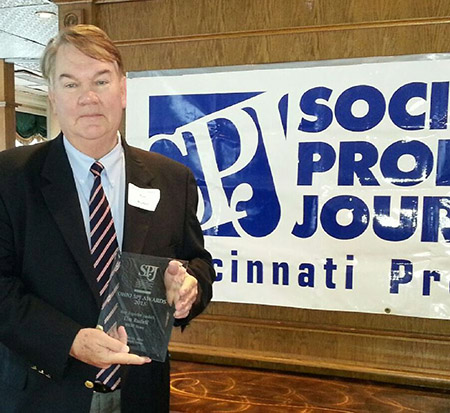 The 2015 Ohio SPJ Awards competition honors print and broadcast journalists from Ohio and bordering states who best served the public interest in 2014. The awards, which are presented by the Cincinnati, Central Ohio and Cleveland professional chapters of the SPJ, were judged by members of SPJ chapters throughout the U.S.

Kent State President Warren Launches Season of Philanthropy on Giving Tuesday
Kent State University President Beverly Warren has announced that she will personally match all gifts up to a total of $25,000 for donations made to...
Kent State University Bookstore Announces Annual Holiday Giving Tree Program
The Kent State University Bookstore has announced its fourth annual Holiday Giving Tree Program. A tree is set up at the entrance to University...
Allerton Apartments Benefited Local Agencies and Kent Fire Department Prior to Being Razed
The Allerton Apartment Complex went through its final phase of demolishment at the end of August. The process of closing the apartment complex has...
e-Inside
Street Address
University Communications & Marketing