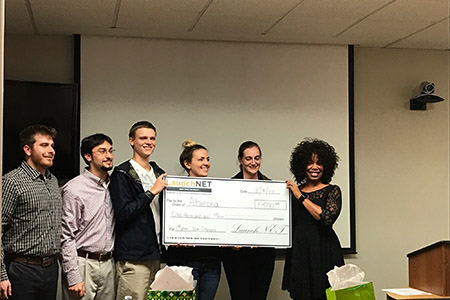 “This win, coupled with the interest we received at the hackathon, has really boosted our confidence in the viability of our product and made it a possibility as a legitimate business venture in our eyes," says Abeona team member Holland. "We are excited to take on regionals and see just how far this jacket can take us.”

Hermes, developed by Naser Al Madi, a doctoral student in the Department of Computer Science, is an active-sports helmet with embedded technological features to keep wearers safe and aware of their surroundings. Besides the $1,000 prize from LaunchNET, the idea also won “Best Advancement of an Existing Technology” at the hackathon. By adding tech features such as “ears,” which can measure wind, and incorporating an informational display, Hermes becomes more than just head protection, but also a tool that hang gliders can use to combat mental fatigue while riding.

Because of the wealth of viable business ideas, the judges chose to award two third-place honors. Those winners were Obianuju Izuchukwu​, a sophomore majoring in fashion merchandising, with her pop-up thrift shop idea, Popstyle, and Colton Jones, a senior majoring in entrepreneurship, with his coffee bike vendor, the Bean Bike. Both won $500.

The other finalists who pitched at the competition were the Pastimes by Evan Laisure, a senior majoring in visual communication design, and Mowgig by Richard Hildebrand, a graduate student pursuing his MBA.

The Idea Olympics is an annual competition held by LaunchNET Kent State to assist Kent State students with innovative business ideas with funding, as well as to choose a deserving team to go forward to the regional IdeaLabs competition. IdeaLabs is hosted by the Entrepreneurship Education Consortium, a collective of 11 Northeast Ohio universities focused on creating experiential entrepreneurship activities to promote entre/intrapreneurship among college students.