Jarrod Tudor, Ph.D., of Burton, Ohio, has been selected as the new dean and chief administrative officer of Kent State University at Geauga, located in Burton, Ohio, and Kent State's Regional Academic Center in Twinsburg. Tudor has served as interim dean of Kent State Geauga since July 1, 2014. He will begin serving as the permanent dean on Feb. 1, 2016.

"I am so excited to be provided the opportunity to continue the momentum we've established at the Geauga Campus as we work to transform and improve the Regional Campuses," Tudor said.

Todd Diacon, Kent State's senior vice president for academic affairs and provost, says he is pleased that Tudor has agreed to serve as dean. 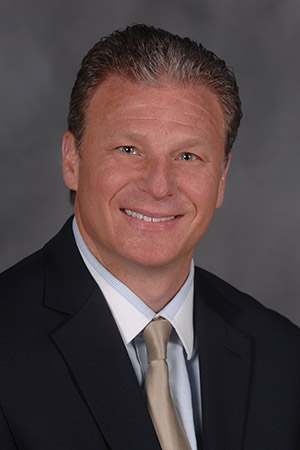 "Jarrod understands both the Regional Campuses and the Kent Campus as well as anyone, and I know he will provide excellent leadership for our Geauga Campus and our Regional Academic Center in Twinsburg," Diacon says. "I am especially pleased that Jarrod has agreed to serve for what might be a more limited two-year appointment as we contemplate changes to the administrative apparatus for all of our Regional Campuses. Kent State is fortunate to have an administrator of Jarrod's quality and talent on our team."

Tudor has worked at Kent State since 1996. Prior to serving as interim dean and chief administrative officer of Kent State Geauga and the Regional Academic Center, Tudor served as the 2013-2014 Provost's Fellow and the director of Paralegal Studies. He also has served as an associate professor, teaching courses at Kent State in finance, higher education administration, political science, justice studies, history, paralegal studies and journalism for 19 years. He has been a member of the Faculty Senate and served on the executive committee for three years. Tudor also has served several years as grievance chair of the full-time, nontenure track chapter of the American Association of University Professors (AAUP-KSU).