Approximately 13,500 years after nomadic Clovis hunters crossed the frozen land bridge from Asia to North America, researchers are still asking questions and putting together clues as to how those early inhabitants not only survived in a new landscape 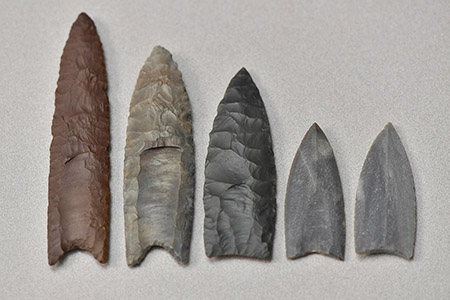 with unique new challenges, but also adapted with stone tools and weapons to thrive for thousands of years.

Kent State University’s Metin Eren, director of archaeology and assistant professor with the Department of Anthropology in the College of Arts and Sciences, and his colleagues are not only asking these questions, but they also are testing their unique new theories. They want to gain a better understanding of the engineering, techniques and purposes of Clovis weapon technologies. Specifically, they study stone projectile points such as arrowheads and spear points made by flint knapping, the ancient practice of chipping away at the edges of rocks to shape them into weapons and tools.

In their most recent article published online in the Journal of Archaeological Science, Eren and his co-authors from Southern Methodist University (Brett A. Story, David J. Meltzer and Kaitlyn A. Thomas), University of Tulsa (Briggs Buchanan), Rogers State University (Brian N. Andrews), Texas A&M University and the University of Missouri (Michael J. O’Brien) explain the flint knapping technique of “fluting” the Clovis points, which could be considered the first truly American invention. This singular technological attribute, the flake removal or “flute,” is absent from the stone-tool repertoire of Pleistocene Northeast Asia, where the Clovis ancestors came from.

Archaeologists have debated for years why the Clovis added this flute feature to their points. The feature, perhaps first made by accident, is a thin groove chipped off at the base on both sides, and it would seem to make the base very thin and brittle. However, after several types of testing, the researchers have reported that this thinning of the base can make it better able to withstand and absorb the shock of colliding with a hard object, such as the bone of a mastodon or bison.

The fluted point turned out to be an invention that allowed the colonizers to travel great distances with some confidence that their weaponry would hold up at least until they could find the next rock quarry to make new points.

“It was risky and couldn’t have been easy to learn how to do this effectively,” Eren explains. “Archaeological evidence suggests that up to one out of five points break when you try to chip this fluted base, and it takes at least 30 minutes to produce a finished specimen. So, though it was a time-consuming process and risky technique, successfully fluted Clovis points would have been extremely reliable, especially while traveling great distances into unknown regions on a new continent. They needed points that would hold up and be used over and over again.”

In their article, the researchers compared standardized computer models of fluted and unfluted points – as well as experimental “real-world” test specimens – and found that the fluted-point base does in fact act as a “shock absorber,” increasing point robustness and ability to withstand physical stress via stress redistribution and damage relocation. In other words, upon impact, the brittle base of the spearhead crumples and absorbs some energy, which prevents fatal breaks elsewhere on the point, so it could be reused.

“It’s amazing to think that people 12,000 years ago were flaking shock absorbers and engineering stone weapons in a way that it took 21st-century modern engineering to figure out,” Eren says.

“As engineers, we don’t typically get to work with archaeologists, but this project has allowed us the exciting opportunity to provide additional tools from engineering mechanics to explore how fluting affects the behavior of Clovis points,” Story says.

Read more about the Eren Lab