Ken Ditlevson, director of the LGBTQ Student Center, says this is the first grant for the center. 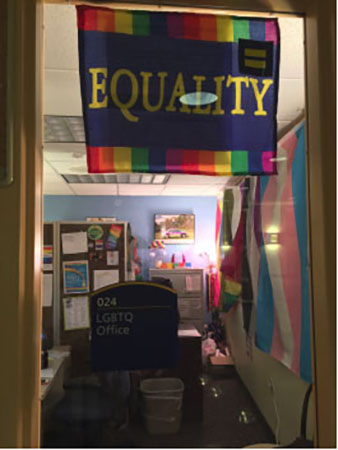 “We knew that it was the perfect target grant because it serves the gay, lesbian and trans community, and is for this county, as well,” Ditlevson says.

“We’re trying to get freshmen and sophomores or students who’ve newly come out so we can add a layer of emotional support,” Ditlevson says. “We’re looking at vocation and career information and the networking piece, and then having another piece of our community there to support our students.”

The grant proposal was a joint effort between Ditlevson, the center’s former graduate appointee, Jenna Brinker, and Fall 2015 Semester’s LGBTQ Student Center internship team. Ditlevson says the group looked to develop a strong proposal for a program to meet the community’s need.

“Students wanted exposure to different career information, and they wanted to know what it was like to work as a gay, lesbian or trans person in a particular field,” Ditlevson says.

Ditlevson hopes this leads to a widening network of mentors meeting other mentors to build what he calls a strong community within Kent State and beyond.

“I think this program has great potential to connect different generations,” Ditlevson says. “There’s learning to be done on both sides. The students are going to learn the vocation information, but I think our graduates are going to learn what it’s like for students today. There’s different terminology they might not be as familiar with, and identities and orientations they’re not as familiar with, so I think there’s going to be a lot of learning going in both directions.”

The LGBTQ Student Center is planning to relaunch the QUEST mentorship program this September. People who are interested should contact Ditlevson at LGBTQSC@kent.edu for an application. Ditlevson says LGBTQ mentors who also are people of color are especially needed for the program.

“We’ll continue to collaborate with the Women’s Center, just like we always have with the multicultural center or the Jewish community center or any other partners and departments across campus,” Ditlevson says. “Collaboration really enhances our ability to reach students and impact the community,”

In addition to providing safe space trainings, Ditlevson says the LGBTQ Student Center serves as a resource for all Regional Campuses and provides information on a variety of issues, including the need to establish gender-inclusive restrooms on campuses.

For more information about the LGBTQ Student Center, visit www.kent.edu/lgbtq.

2016 Homecoming Date to Be Released Tomorrow in the Most Memorable Way
The Kent State University Alumni Association is revealing the Homecoming date with a bang – a special aerial announcement. And you can be a part of...
University College Announces Office of Alternative Credit and Articulation Agreements
University College is pleased to announce the launch of the Office of Alternative Credit and Articulation Agreements, formerly known as Dual...
University Libraries’ Professor Selected for Open Education Resources Fellowship
Fellowship to focus on open textbooks and affordable education
e-Inside
Street Address
University Communications & Marketing