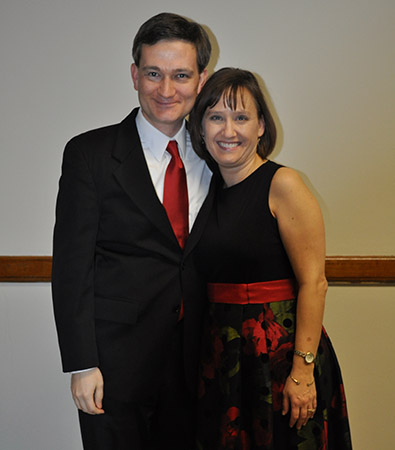 Under the direction of Melissa Fucci, associate professor of music at Kent State Salem, this year’s theme was “Silver Bells.” Former director Kerry Glann returned to the campus and conducted a portion of the performance.

The choir offered a variety of songs, including favorite selections from the last 25 holiday seasons, accompanied by area professional musicians and members of the Quaker City Band.

The Kent State Salem choir was the brainchild of former campus dean James Cooney, who wanted to strengthen ties to the local community. It began in 1991 as a small student chorus, then known as the Kent State University Salem Campus Choir, and developed into a community choral group, now named the Communiversity Choir.

Ann Waters was the first director of the choir, followed by the late Jeffrey Nolte (former dean of the Columbiana County campuses), Glann and Fucci.

The choir is known for its eclectic blend of singers and songs, representing a diverse range of musical genres. This year’s choir included more than 30 vocalists.

Aside from its two yearly concert at Kent State Salem, the choir has performed in area churches, nursing facilities and at community events, as well as with musical groups on the Kent Campus.

This is Fucci’s seventh year as director of the Communiversity Choir. She began teaching music at Kent State in 1998 and has been with Kent State Salem since 2010. At Kent State, she served as choral director, musical theatre music director, course instructor and as the education coordinator at Porthouse Theatre Academy.

Fucci has been a music mentor on the Music!Words!Opera! project with Opera Cleveland; a music faculty member at University School; the music and movement specialist at the Cain Park School for the Arts; and has directed numerous productions at Porthouse Theatre, Kent State and other venues.

A performer and private instructor of keyboards and woodwinds, she also conducts a wide variety of choral and instrumental ensembles.

Fucci earned her Bachelor of Music in Performance from Baldwin-Wallace College Conservatory of Music and her Master of Music in Conducting from Kent State. She also holds a certificate in early childhood music from the Gordon Institute of Music Learning.