Kent State University junior Rachel Stypinski won the all-around title with a 39.500 to lead the Golden Flashes at the 2017 Mid-American Conference (MAC) Gymnastics Championships held March 18 at the Stroh Center in 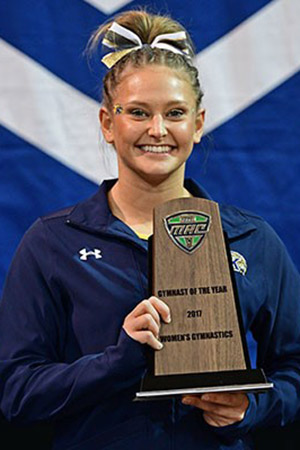 Stypinski’s all-around score ties the program record at the conference championship meet that was set by Marie Case in 2014 and ranks sixth overall. Stypinski also won the beam title and finished in a six-way tie for first on bars. Her third 9.950 of the season set a program MAC Championships record on beam. She also matched her career-high score on bars with a 9.900.

A native of Boyertown, Pennsylvania, Stypinski earned MAC Championship All-Tournament Team honors for the second time of her career. She was the only competitor to earn a 10.000 score from a judge, doing so on beam, and was one of only two competitors to earn a 9.900 or higher on multiple events.

Following the meet, Stypinski was announced as the 2017 MAC Gymnast of the Year. Just the third repeat winner since the inaugural award was given in 1997, Stypinski had the conference’s highest regular season Regional Qualifying Score (RQS) for all-around (39.065), floor (9.930) and beam (9.910). She entered the weekend ranked ninth in the country on floor and 11th on beam.

The Kent State gymnastics team closed out the 2017 season on April 1, with a 194.375 to place sixth at the NCAA Morgantown Regional hosted by West Virginia University in Morgantown, West Virginia.