Live Chat
Kent State student Brooke Mullins stands in front of the Lordstown Fire Department - Station 36 in the Village of Lordstown, Ohio, where she serves as a volunteer firefighter.

Student Takes on the Challenge of a Lifetime to Help Others

Weighing in at barely 100 pounds, Brooke Mullins summoned every ounce of strength she had, and even more she didn’t. Her muscles were shaking; her mind was exhausted. The Kent State University junior had one last shot at 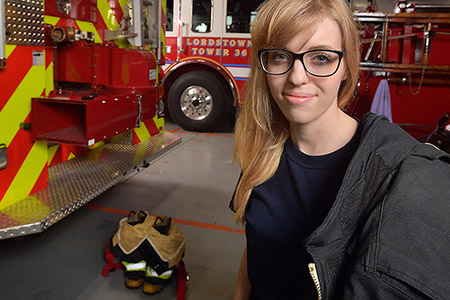 overcoming the most grueling portion of a physical exam. If she could pass it, Mullins would follow in the footsteps of her father and brother as a certified volunteer firefighter.

Her task? Remove a 30-foot extension ladder off the side of a firetruck, carry it to a nearby building, lean it against the side and successfully extend it within 10 minutes. The problem was that the ladder was more than double her own weight, and it hung well above her reach.

“Trying to get the ladder off the truck terrified me because I truly thought I was going to drop it on my head,” Mullins says. “I was unable to carry it to the side of the shed, and failed the physical exam several times because of it. It was extremely discouraging, and I was filled with so much shame and embarrassment. The instructors and fellow students watched as I failed again and again.”

Fighting fires is not what most would expect from Mullins, who is studying Teaching English as a Second Language with a minor in Japanese in Kent State’s College of Arts and Sciences. After graduation, Mullins plans to move overseas and teach English for a few years before returning for a master’s degree. To balance her full-time studies and firefighter training, Mullins would spend hours on campus taking classes, only to return to the classroom at the firehouse at night and on weekends to train for physical and written exams.

Mullins questioned why, after lagging behind the other trainees, she would risk wounding herself to pass the physical exams.

“There were several instances where I had to fight back tears to keep face in front of my instructors,” Mullins says. “I truly considered dropping out and picking up a different job.”

But through it all, Mullins would see all the accidents and disasters that had the potential to happen in her hometown. She decided to do everything she could to help.

During the last chance at the physical exam, Mullins found unexplainable strength. Her petite frame was no match for her determination. The 30-foot, 200-pound ladder suddenly was not as cumbersome; carrying it to the building did not seems as far; and extending the ladder did not take as long. She did it. Mullins overcame it all to help others.

“I don’t know what happened,” she says. “Out of desperation, I mustered every last bit of my strength to follow the steps of the exam. I could not tell you how I was able to finish and pass the exam at that point.”

Mullins is now a volunteer firefighter for the Lordstown Fire Department in Ohio. She works mostly during the summer and winter breaks. She is humbled by what she learns from veteran firefighters, and she enjoys supporting them in some of the most dangerous situations. She does not think twice about putting her life on the line for others.

“For the fires that I have been in, I haven’t really felt overwhelming fear,” Mullins says. “There’s an extreme sense of adrenaline, and all my senses become heightened to pay attention to everything around me. I usually don’t think of anything but the objective and keeping safe with my partner.”

While Mullins looks to the future, she plans to take a break from firefighting when she teaches abroad, but she knows in her heart that she will continue as a firefighter or at least be a strong supporter of local fire departments. She has advice for anyone who wants to make a difference, no matter how many obstacles it takes to overcome or how small the gesture might seem.

“Look for any and all opportunities,” she says. “Start small. Make a conscious effort to open doors for people, help people pick dropped things up, compliment more people, join a community volunteer club, or more. Just picking up these small habits will greatly change your mindset, and you’ll start to notice bigger and bigger ways to help your community out.”