The Kent State University Writing Commons hosted a tutor training and development workshop for area high school students who had been selected by their teachers to become writing center tutors at their schools.

More than 30 students and teachers from three high schools: Stow-Munroe Falls, Tallmadge and Cuyahoga Falls participated in the two-hour workshop, which took place recently at the Kent State Writing Commons located in University Library on the Kent Campus.

Jeanne Smith, director of the Kent State Writing Commons, says the purpose of the workshop was to help train high school students to be writing center tutors.

"We host a tutor training workshop for local schools every semester,” Smith says. "It's fantastic professional development for our Writing Commons tutors, and it serves the community."

As the movement to develop writing centers in the K-12 schools gathers momentum, the Kent State Writing Commons has taken a leadership role. 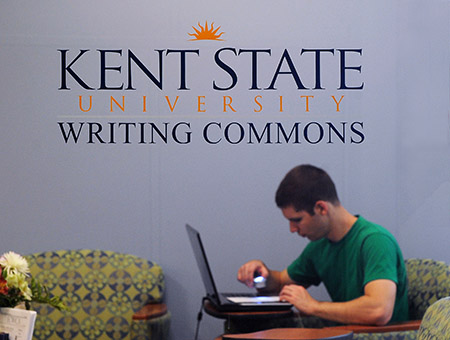 Smith explains how she believes the best way to learn something is to teach it to someone else.

“A writing center tutor doesn’t edit someone’s paper, that would be doing the writer’s work for them,” Smith says. “A tutor is supposed to do what a writer can’t do for themselves ever: be the audience and provide the reaction. Tutors ask questions an audience would ask and questions writers wouldn’t think to ask themselves.”

The training and development workshop lasted two hours. It consisted of roundtable discussions on writing center methods. The goal was to keep it conversational and have students exchange ideas.

Samantha Hess, a Writing Commons tutor and a senior human development and family studies major at Kent State, says at one of the tables she discussed with students how tutors should talk less and the writers should talk more.

“Practice and constructive feedback help make an effective tutor,” Hess says. “The roundtable discussions were helpful because it allowed the high school students have a chance to start talking about different areas of tutoring, while giving them a chance to learn more about specific tutoring skills.”

Smith says when she is looking to hire tutors she makes sure they have good people skills and are competent, self-reflective writers.

“Someone once told me to hire on personality, anything else you can train,” Smith says. “I never realized how true that was until taking on my position at the Writing Commons. Sometimes the best writer could lack people skills. It is difficult to train someone to be compassionate, they either are or they aren’t.”

Smith says she hopes students who attended the workshop are more confident in the work that they could do and hopes they mentor each other.