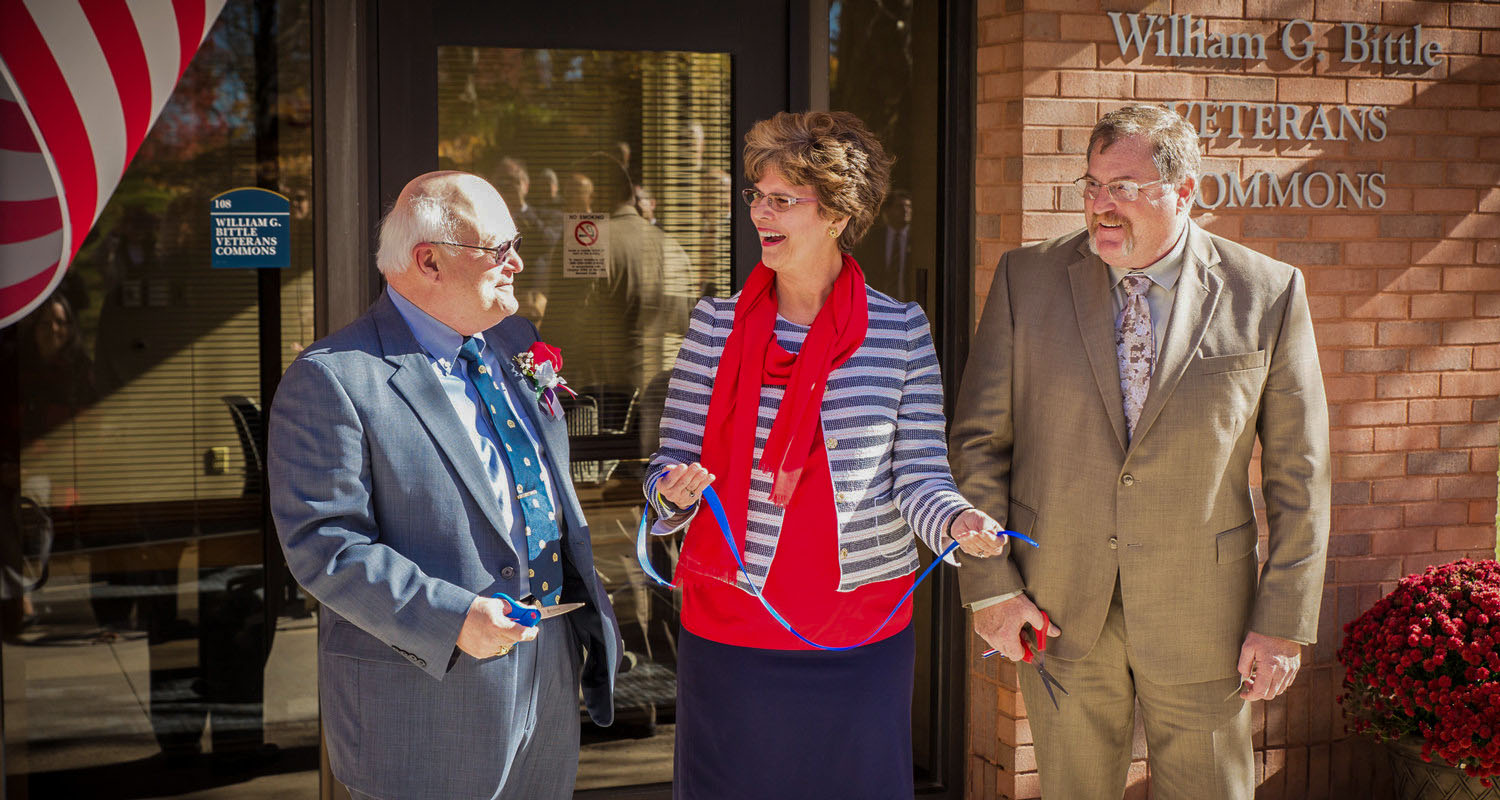 Lawrence Weidleman tried attending college soon after being discharged from the U.S. Army. He had been injured during Operation Desert Storm/Desert Shield so he was still very young. But he realized in short order that he was not ready.

The Kent State University at Stark student and 45-year-old middle childhood education major told his story to a gathering of more than 100 onlookers during the dedication of the new William G. Bittle Veterans Commons on Nov. 10. The space is designed for veteran students to gather between classes and talk or study together, or to provide each other with support.

“I tried college the fall after returning from Desert Storm,” the Canton native says. “And like many other veterans, I dropped out, not because of the academic rigor but because my life experiences at the age of 23 were drastically different than the lives of my classmates. We are different. We have a different approach to life for many reasons, specifically, because of the way we were trained. Campus was an awkward place because of my recent past. This common area [on campus] makes a statement to veterans and active duty members that have experienced the same thing I did, and it is a comfort zone that speaks our language.”

Named in honor of William G. Bittle, Ph.D., Kent State Stark’s longest-serving campus dean from 1981-2004, the Veterans Commons offers computers and printers, which will assist those working on projects and papers, while a SmartCard reader enables students to print out their military orders. Swipe card access at the door ensures that all who enter the room are current or former members of the military. Soft chairs and sofas, a TV and DVD player, refrigerator and microwave make the space a welcoming respite. 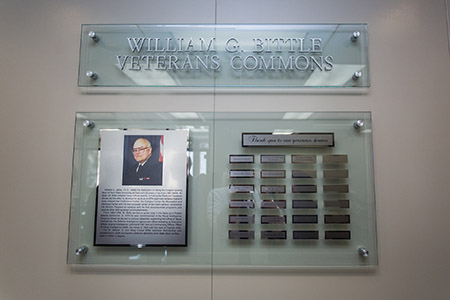 Bittle, himself a veteran of the U.S. Navy, expressed his gratitude for the honor and told the crowd how proud he was to be a veteran and civil servant, particularly at Kent State Stark.

“This is wonderful,” Bittle says. “I was so honored when I was told first that the Veterans Commons was being built and then it was going to be named after me. A space like this is needed for our veterans, and I’m proud that the campus I led for many years is providing it for students, faculty and staff.”

An email survey and face-to-face interviews with Kent State Stark student-veterans revealed that they often feel alone and could not relate to or connect with classmates who are not veterans and who do not share the experiences of those who have served in the military. Universities around the country are taking note. Nearly 50 percent of American universities offer a veterans student lounge or designated gathering space.

For many veterans, Bittle says, leaving the military can mean abandoning a profoundly defined identity, community and purpose. On college campuses, a way to help student-veterans is by creating a veterans center, a dedicated physical space where veterans can be connected with whatever services they need: medical, psychological, financial, emotional or academic. More importantly, it is a place where they can connect with and support each other.

Kent State Stark Dean Denise Seachrist, Ph.D., notes that there are about 160 military veterans from seven counties in Ohio taking classes on campus.

“We stand here today committed to their success,” Seachrist says. “I am also very grateful to the many faculty and staff on campus who served in the military. It is important to pause and remember those who protect our uniquely American freedoms. On this day, let us reflect and pay tribute to those who have served and are currently serving in the military.”

The William G. Bittle Veterans Commons is a 1,100-square-foot space adjacent to the Learning Resource Center on campus. The main area of the space also can be used for guest speakers, such as local company employment recruiters and motivational speakers, while a smaller room offers privacy for counseling sessions with a campus counselor, if needed.

The Commons was paid for solely by donations from Canton-area business leaders and friends, including Diebold Nixdorf, the Dominion Foundation and Levin Furniture, which donated the chairs and sofas for the room.

For more information about the Veterans Commons or to donate for future improvements to the space, contact Karen Fettig, director of advancement, at 330-244-3225 or kfettig@kent.edu.