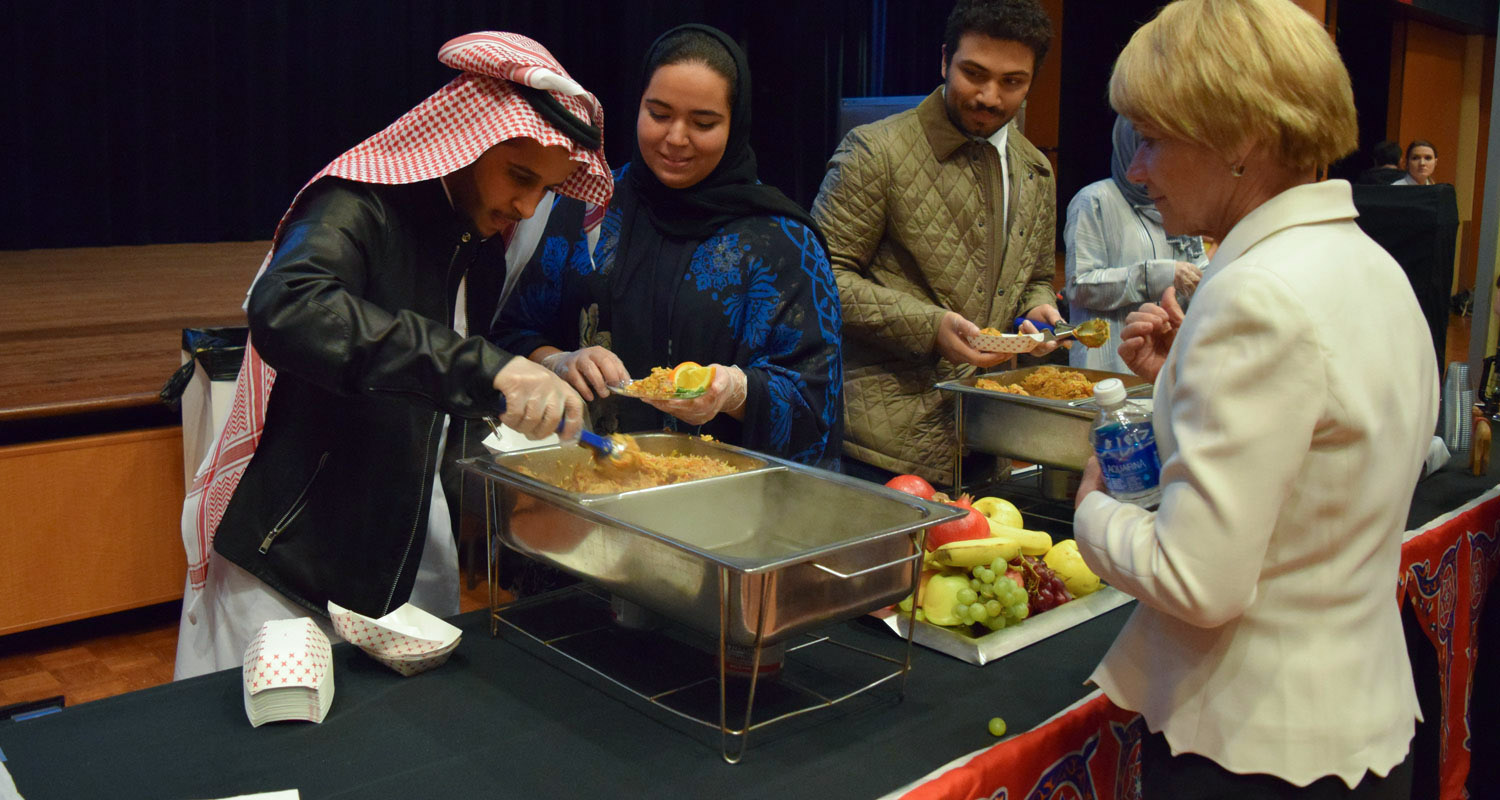 An audience of 870 Kent State University students, faculty, staff and families packed the Kent Student Center Ballroom on Nov. 17 to enjoy the culinary creations of six international cooking teams in this year's International Cook-Off Competition. Three judges – Jim Bracken, dean of University Libraries; Victor M. Torres, director of global engagement at Northeast Ohio Medical University; and Kathy Spicer, outreach program manager for Kent State’s Office of the Provost – were given the task of selecting the top three winners in the competition. The audience also was invited to get in on the competition by using their cellphones to vote for the winner of the People's Choice Award. Six student culinary teams – from Bangladesh, Brazil, India, Nepal, Saudi Arabia and South Korea – had been selected to compete from almost 30 entries. Each team prepared and presented a different cultural entrée and beverage from its home country.

View photos from the event  (Courtesy of University Libraries)

“The cook-off was a delightful representation of the unique way the Kent State community embraces and celebrates diversity in all of its forms,” says Kent State President Beverly Warren. “I am so grateful to all of the students who shared their cultures and traditions as expressed so meaningfully through the special foods of their countries." 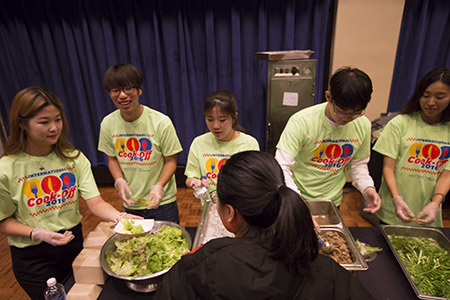 “The organizers did a fantastic job, it was incredibly well-attended, the atmosphere was festive, the president came to visit and the food was excellent,” Fantoni says.

The cook-off's master of ceremonies Justin Hilton, senior associate vice president for university relations, welcomed the 870 attendees, introduced the cooking teams and then got the evening's festivities underway with a hearty "let's eat!" Immediately, the audience queued up at the six serving stations and began enjoying the various dishes, which the teams had prepared. The judges sampled the food and compared notes in preparation for making their selections for the first-, second- and third-place winners.

Throughout the evening, Hilton kept the audience entertained as they satisfied their appetites with a series of interviews with members of the cooking teams and the judges, as well as a number of special guests – including a welcome, yet surprise visit from the university president. The interviews provided a mix of information about the cooking teams' native countries, the preparation and ingredients of the food and plenty of laughs thanks to Hilton's humorous approach to the proceedings. The interviews were conducted in a small side set, which resembled a late-night talk show stage.

Things got serious, though, when the awards ceremonies began. Hilton returned to the main stage and was quickly joined there by the judges, cooking team members and Office of Global Education staffers Desnee Stevens and Angela Schwarzer, the masterminds behind the evening's festivities. The excitement in the ballroom was palpable as Hilton opened three envelopes – à la the Academy Awards – to sequentially reveal the third-, second- and first-place winners:

“All the feedback that we heard from people about the food was positive,” says Saleh Shahini, captain of first-place winner Team Saudi Arabia. “They all liked it and came back again and again. But we didn't expect to be the first-place winner based on the judges’ opinion, which really shocked us. We are so happy and so thankful to everyone who participated and to all the organizers. The most important thing is not that we won, but it is that we got to know awesome people from different countries and with different expertise.”

While the crowd roared their approval of the third- and second-place winners, upon the announcement that Team Saudi had won the coveted first-place award, a small crowd of Saudi students, friends and family rushed the stage to join the cooking team in its celebration, much to the delight of the rest of the audience who acknowledged the winners with thunderous applause.

It took Hilton several minutes to calm and quiet the crowd so that he could complete the evening's ceremonies with the announcement of the winner of the People's Choice award. This year, the cook-off audience could vote for their favorite food using their cellphones by calling a prescribed number and texting the appropriate code of their selected team. More than 400 of the 870 attendees voted, and the results were tracked on an online voting site. The voting was, therefore, kept secret until a graphic was flashed on screen displaying the voting results for all six teams. The display revealed that Team India had received the most votes as Hilton declared them the People's Choice winners. He was barely heard over the roar of the crowd for Team India.

Judges of the competition had wonderful things to say about the event.

"I appreciated the enthusiasm of the students,” says cook-off judge Spicer. “It was such an uplifting event and obviously well-received by the campus community. All of the food was so delicious. In my opinion, all of the teams deserve high praise for the efforts put forth."

"Congratulations to the Office of Global Education for hosting a great event,” says cook-off judge Bracken. “It was a delicious blast. I enjoyed every minute of it. The food was excellent. The competition was fierce but friendly. It was a real Kent State community celebration."

With the close of the festivities, attendees slowly filed out of the ballroom, while the cooking teams lingered behind a while longer basking in the glow of their hard work in preparing the culinary offerings and in the success of providing a measure of delight and satisfaction to everyone in attendance that night.